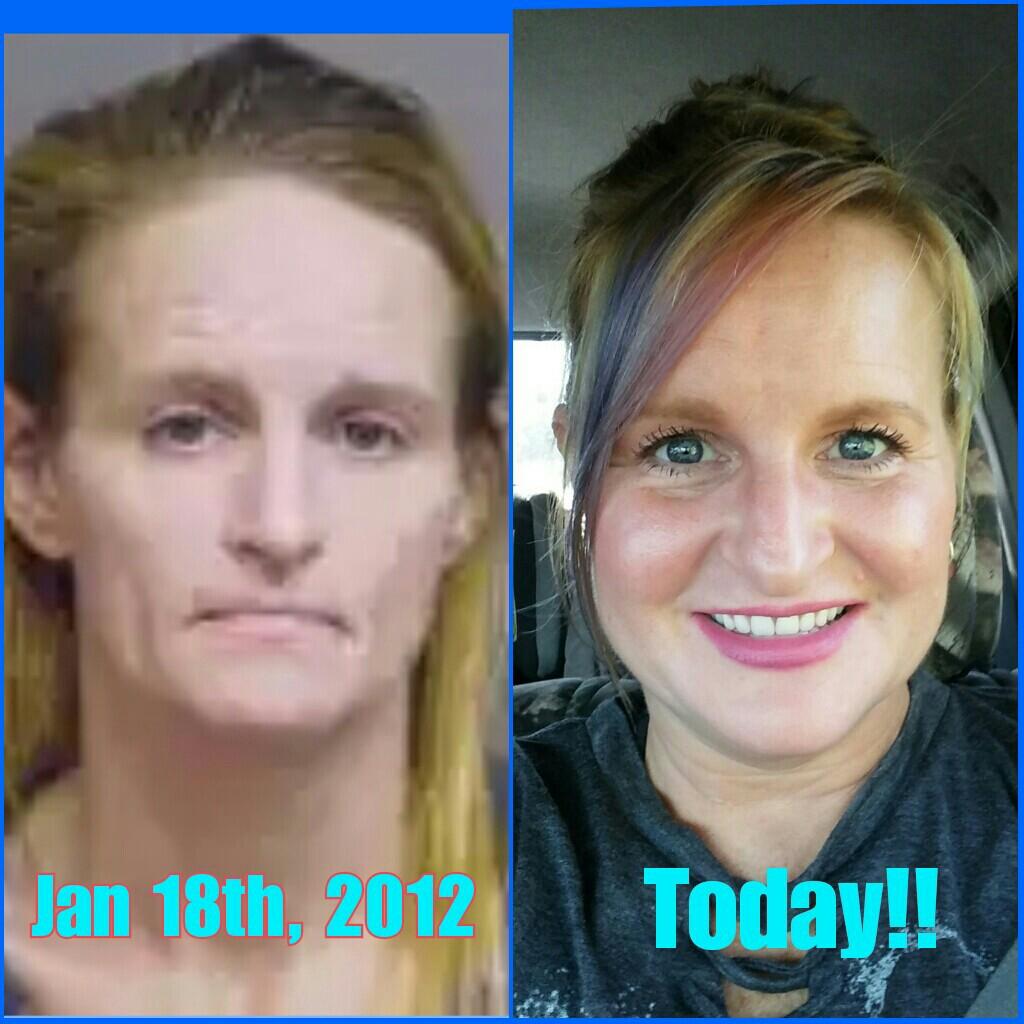 I recently celebrated six years clean and sober. How is it possible that the before photo was really me at one time.?

I can’t believe I’ve made it this far. I remember getting arrested that morning six years ago like it was yesterday. I was so lost and so broken. I was only a shell of a person… because everything inside me had died.

My husband and I were living in a roach-infested motel – high on every drug we could get our hands on. We had lost everything we had… including custody of our daughter.

We always talked about our hopes and dreams, and how one day we would get her back and get clean, but when you are lost in that dark hole it seems there will never be an end.

That morning of my arrest there was loud banging on the door— which we knew could only be one thing.

The warrant officer’s were there to take me in, and I immediately knew I wouldn’t be getting out of jail any time soon, because I had too much I had to answer for.

Two days later, surprisingly, my husband had actually packed up everything in that nasty motel room, stayed the night at his mothers … and the next morning decided to go to rehab.

I ended up getting eight months in jail.  At this point I had been to at least 20 different rehabs, and been locked up at least 30 times. I had been running the streets for well over 10 years, but this time… Something was different. I actually took the time to focus on myself instead of all of the drama and crap going on in and out of the jail.

My husband completed rehab, moved into a halfway house, got a job and started creating a relationship with our daughter.

By the time I was released, he had a cute little place for us to move in to, and our daughter was waiting with him to pick me up the morning I was released Aug. 9th, 2012.

This is where the real work started. Since my husband and I already had the dynamics of using together, the odds of us getting clean together were less than 1% … So we didn’t stand a very good chance.

One day at a time we worked together; and as it turns out, we both really did want the same thing. Some how, some way, that feeling of wanting to use was lifted. I chased visitation with my daughter like I chased my drugs. My husbands parents had custody of our daughter, and slowly, we earned rights. It didn’t happen overnight, we had to prove ourselves and I was ready to do that.

In 2013 We got custody of our daughter back…

Today is such a gift. I have re-established relationships with people that I thought were forever lost, and I’m closer than ever with my family. In fact, I actually had a big family reunion at my home in 2015 …The same year my husband and I welcomed a healthy baby boy.
I have worked hard and finally overcome the demons inside me that led me to that awful place to begin with.

I’m sharing this in hopes that this will touch somebody…and if they are in the same place that I was, or if you know somebody that is in active addiction, change is possible.
There was a time where people didn’t even want to stand next to me in line at the store, and now people actually like me and want to be around me.

If a low-down, dirty, former junkie like me can change… Anybody can do it.

I am blessed beyond my wildest dreams. Oh, and My husband and I will be celebrating 10 years of marriage this year.

An AMAZING Life After Addiction IS Possible… We Are Proof!

If you have a story of recovery from addiction, depression, self-harm, eating disorders, gambling, sex addiction—or anything else you have overcome and want to share, check out the submission guidelines HERE:

I wrote a book about my own dark journey through addiction, and you can read the first five chapters on Amazon for free HERE: