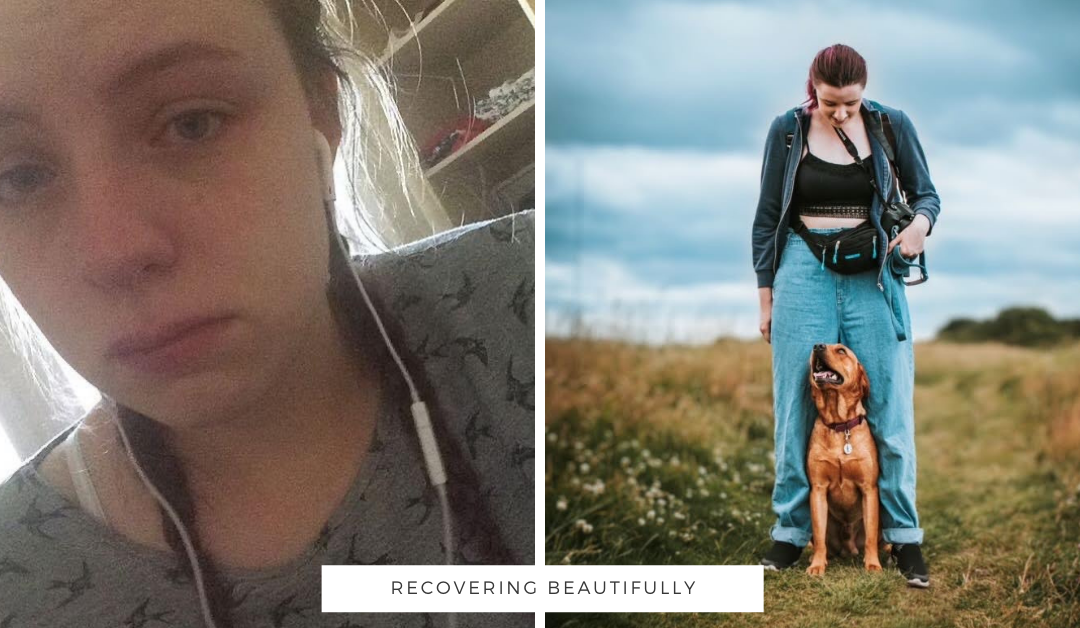 Throughout my whole teenage years, I started showing signs of depression and anxiety. I always knew I’d been an anxious child, but I fobbed it off and put it down to going through puberty. After a few visits to the school nurse, I was referred to CAMHS – short for the Child and Adolescent Mental Health Service. If you’re from the UK and know if CAMHS, you will know how shocking they are.

I saw a psychologist and psychiatrist on and off until I was around 17.

At the end of 2015, I hit a really bad spot. I was extremely depressed and couldn’t leave the house. I wasn’t showering, eating, or getting out of bed. I was referred to the crisis team who I saw daily until February 2016.

2016 rolled around and I was getting worse by the day. Suicide attempt after suicide attempt and eventually I was admitted to a children and young people’s psychiatric hospital for a month – aka the worst month of my life. While there I was diagnosed with Borderline Personality Disorder, after only being there for a couple of days. This diagnosis changed my life as it was partly incorrect. After a month I was discharged, and I came out worse.

I’d learned different self-harming behaviors whilst in there, and I was discharged with no support.

When I turned 18 in April 2016, everything changed. I was given an appointment for adult services, and I cannot explain just how disheartening that appointment was. I was told there was nothing they could do for me, despite only being discharged from a psychiatric hospital a month previously.

For the next 4 months, I had no support.

I was constantly in A&E for self-harm and suicide attempts, and each time the psychiatric team at the hospital told me the only thing they could do was ring the community team that I had had an appointment with. At this point, I had no fight left in me.

Everything changed one early morning in July 2016. I was already on a ward in the hospital, being treated after yet another suicide attempt. It was around midnight, and very quiet. The nurses were doing their rounds every hour. Over the next hour, I realized just how little of a fight I had left in me. I was exhausted. So I made a decision – I would not be alive come morning.

I made another suicide attempt that left me unconscious.

When the nurses found me, they couldn’t wake me up and had to call the team from the ICU to come up to the ward. When I did eventually wake up, I was very disorientated, and they’d reserved a bed in the ICU for me in case I deteriorated. I was told by the nurses if they’d found me 10 minutes later, I probably wouldn’t have survived.

I spent a few days in the hospital after this and I was then admitted to an adult psychiatric hospital. For the next 3 months, I was in and out constantly, including under a Mental Health Act section multiple times.

Since then, things have changed. My diagnosis was changed to complex PTSD, and thankfully I haven’t been back in hospital since 2016.

Don’t get me wrong, I still really struggle with my CPTSD daily. Some days are better than others. Flashbacks, nightmares, anxiety, dissociation are only some of the symptoms I suffer with.

However, these are all made easier by my assistance dog, Chester, who is 2 years old and absolutely incredible.

Some of the tasks he can do are: alert me to dissociation before it happens so I can ground myself, Deep Pressure Therapy to help ground me and calm me down, and fetch me my medication when needed. And then he helps me with daily tasks such as: helping me unload the washing machine and fetching things for me – I get very tired easily, and he’s an absolute saint.

Chester has given me my independence back – I went from not being able to leave the house, to now being in my first year of university, completing an undergraduate degree in Health and Social Care. He came into my life at a crucial time, and ultimately, saved me.

The day I decided to throw my all into recovery and fight for my life, was the best day of my life.

It hasn’t been easy, and it’s an ongoing process, but if I’ve learned anything, it’s this – everybody wants happiness, nobody wants pain, but you can’t have a rainbow without a little rain.