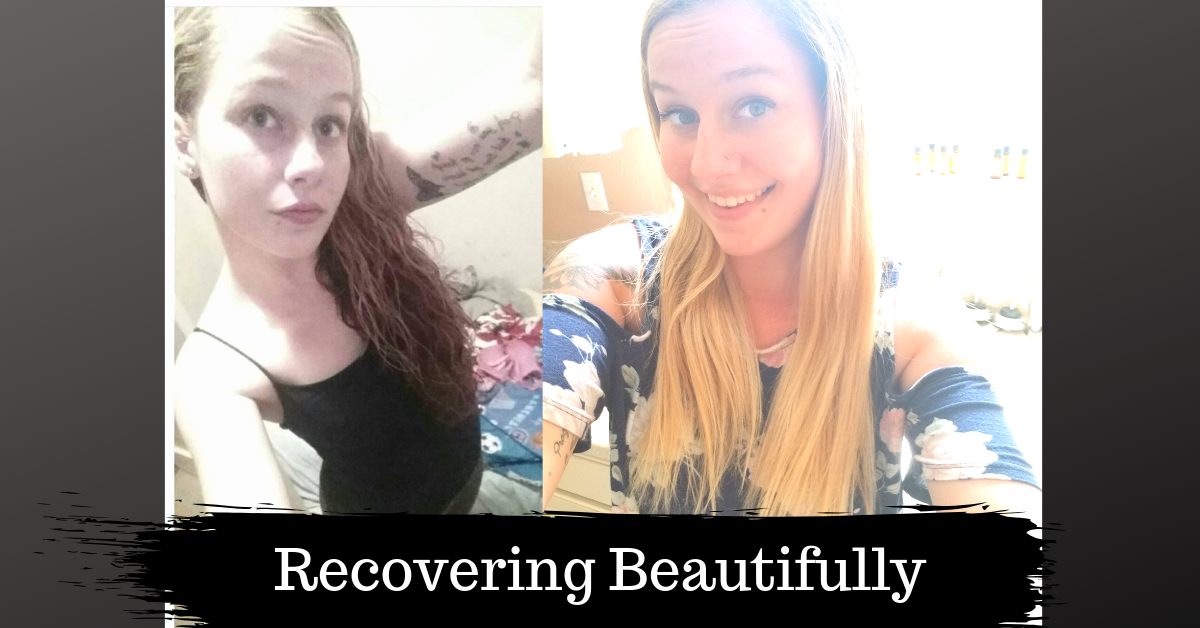 That changed when I had my first drink of alcohol around age twelve. I didn’t drink much that first time, but I instantly knew that I liked how it made me feel.

I was fourteen when I smoked marijuana for the first time and I instantly fell in love with it. Before I knew it I was spending my early high school years doing drugs and drinking almost every day.

At age sixteen I began dating my (now) husband who didn’t care for my drug use, so I slowed down a bit— but always found ways to get drunk.

In 2015 my cousin died, and I used that as my excuse to begin a six-month spiral into drugs. I began exclusively hanging out with people who liked to drink and use like I did, or people who were too naïve to notice how severe my using had gotten.

My fiancé began to point out that he thought I had a problem with drugs and alcohol, and stated that I needed help. I instantly began isolating myself from him and his family at that point.

Weeks before my last drunk and high, I went to a friend that was an addict in recovery and told them that I had been using and drinking a lot— and didn’t know what to do. His response was, “Bethany you have to stop that you will die.”

I was not happy with the way the conversation went because for some reason I thought that talking to him would magically save me from my addiction. After we spoke I got in my car to head home and I remember sobbing because I didn’t want to get high anymore.

I wanted to be able to stop—but I didn’t know how.

Despite my desperation to change and stop using, I reached into my center console and grabbed the pills, and took them with tears streaming down my face.

That was the insanity that my life had become, I wanted to stop but couldn’t do it on my own. I even considered that death may be the only way to make it stop…

My last drink was January 15, 2016. That last night my fiancé had kicked me out because he couldn’t stay in my chaos any longer. I went out and I drank a fifth to myself and blacked out drunk. I went back to the house where my fiancé was and he got in the car and started driving me and told me that he was taking me to county jail for a reality check.

I proceeded to punch him in the face multiple times, and pull the steering wheel of the car while going 60 mph.

We flipped into a ditch.

All I remember is hearing him tell the firefighters to get me out first, even though he was pinned in the car. I woke up in the hospital to an officer giving my dad my citation for arrest.

Here I was 19 years old having never been in legal trouble, and now I was looking at assault charges, reckless endangerment, and minor in possession through consumption with a blood alcohol level of .179.

The next morning my fiancé came to see me at my dad’s house and I begged him to give me a chance to change and get help… and he agreed.

That week I called a treatment center and got an evaluation done to get into an outpatient treatment program and started attending AA meetings. I must admit in the beginning it was easy to admit that I was an addict, but never did I think at 19-years-old I could be an alcoholic as well.

After hearing people share their story’s and feeling like they were sharing mine, I finally surrendered and admitted to myself and others— that I am Bethany alcoholic addict.

I now have over three years clean and sober and work a program every day. I have since married my high school sweetheart, brought our beautiful daughter into the world, became a home owner, and most importantly became a trust worthy person.

Today I get to help lead other women through the program of recovery and share my experience, strength, and hope with other people. I have a life beyond my wildest dreams and yes, sometimes life gets hard but I know I don’t have to drink or use over it today.*