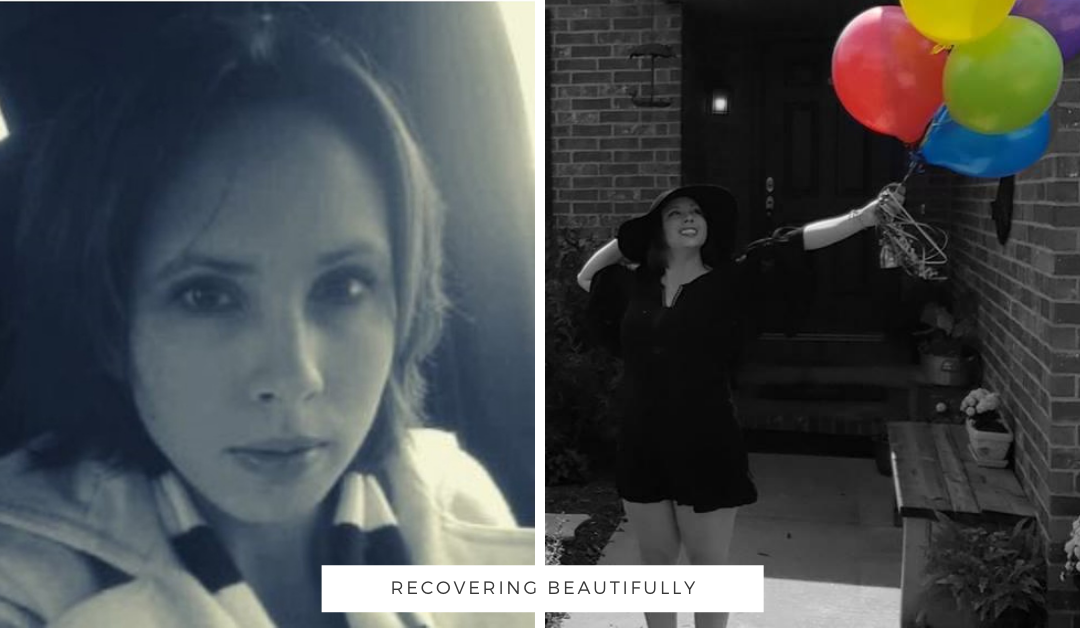 Have you ever made a decision in your life that was so large that it not only changed the direction of your life, but also the lives of those around you?

However, you wouldn’t know it by looking at me. I’m your average mom: I have three kids, a nice home, a sexy husband, two dogs, two cats, and a college degree.

I’m a pretty funny person to be around and most people know me for my dry wit and dripping sarcasm. What a lot of people don’t know about me is the deep, dark waters that I’m treading.

Humor is my lifesaver, my coping mechanism. People don’t understand, that behind those smiles and funny memes is a girl who struggles each day to be enough for everyone, including herself. She is haunted every day by ghosts of her past and prays to be set free… For she is a survivor of domestic violence.

There is nothing monumental in my childhood that led me into a relationship with a man who would fantasize about and act out rape and torture.

I was an average kid from a nuclear family in a small town in the Midwest. I know the stigma around DV survivors is that we are poor, uneducated, and grow up in violent homes. That’s just not true.

In fact, I would argue that what made me vulnerable to this predator was my ignorance about coercive and abusive relationships. I had no idea what to be aware of. It’s like going to the beach and not knowing what any of the flag warnings mean. You don’t know you’re in danger until it’s too late.

In the beginning, everything was great. I was instantly drawn to him because he liked the same music and movies that I did. He was older than me and had dreams of becoming a doctor. He was funny, sweet, and adventurous.

He lavished me with attention I so desperately craved. When he asked me to move in with him after a few months I thought it was normal. I thought this is what happens when you’re soulmates. Things just work.

We got married in a rushed ceremony in his parents’ home. His family was very supportive, so I didn’t think about it being too soon. People who are in love get married. People who are married have children. I wanted to do everything right and to be a good spouse.

It was only a matter of weeks before things went south.

I went from a comfortable, middle-class life where my basic needs were always provided for, to begging family members for money so my utilities wouldn’t get turned off. I was the sole income. He had neglected to tell me that at the age of 27, he hadn’t held a job for more than a few months at a time and that his mother had paid his bills all his life.

I knew his mother was an attorney, but I didn’t know she had a reputation for being a manipulative, lying, unethical bully. No one wanted anything to do with him or her. That was bad news for me.

There was one stigma I found to be true: a man who abuses women has mother issues.

Man, that was so true. His relationship with his mother was codependent and toxic. He would crawl to her for money every month and she would berate him with accusations of neglect and worthlessness. He would then turn and spill that hatred on me, blaming me for him having to ask his mom for money, blaming me because I paid my credit card payment instead of letting him spend it.

Our fights quickly escalated into violence. There was head slamming, wall and door breaking, punching everywhere but the face and neck. He had handguns and rifles and would point them at me, always loaded with the safety off. When he would fly into his rages his eyes would go black and he had no control over what he was doing. It was a miracle he didn’t kill me…even if by accident.

I left 18 months into the relationship.

One day I went to work and didn’t come home. I was delirious with exhaustion, anxiety, and depression. He assaulted me at least three times a week. He woke me up during the night to argue about a dream he had or something he found on my phone. He interfered with me going to work and making money, which made us more dependent on his mom. I couldn’t take it anymore. I went to my mom’s house for the night.

At 10:00 AM the next morning I was served with divorce papers.

The divorce proceedings moved forward but my head was still spinning. As quickly as my relationship started it was ending and what did that mean for me?

My daughter was home with him the night I left and that gave him complete control over me. He set up “terms and conditions” that I was to operate under when I had my daughter; including not allowing her to be around my family.

To me, I hadn’t been able to escape his control and abuse and now I was without my daughter and she had no one to protect her. So, when he promised that he would take medication for his anger and see a therapist for his issues, I was ready to believe him. All I wanted was to be with my daughter. I went back.

After I went back things got worse. I had proven that I would leave, and he was determined not to let that happen again. I had to cut ties with my family, so they weren’t allowed to rescue me.

I was not allowed to have friends. I did not have social media for many years. He was always listening to my phone calls and digging through our computer, so I gave him as little to work with as possible.

When my second daughter was born, and he was still without a job I knew I had to do something. I put myself through college online. He went to school to get his Doctorate in Psychology.

That old drive to become a powerful doctor kept him occupied while I worked on myself. The abuse never stopped. I just became laser-focused on getting away. When I got my associate degree, I applied for a decent-paying job in a town five hours away. There was a school he could attend so he went along with the plan. I knew in order to break free of him I needed to break free from his mother and her power first.

The job that I was able to get was the second major shift in my life. I excelled at this job and got promoted quickly. I was making great money and managing a team of awesome people at only 24 years old. For the first time in my life, I felt like I could do anything. My team and my peers gave me the courage and the confidence to believe in myself. Things were going good for me. Until suddenly they weren’t.

He got kicked out of his school and had no hope of ever becoming employed in any doctoral field. Without the help from his student loans (because he still never held a job) we began falling behind on bills.

We were evicted from our home and sued. I moved my family into a tiny 2-bedroom apartment with nothing but two beds, a kitchen table, and my kid’s toys. My daughter’s birthday and Christmas were the lowest days of my life. I couldn’t throw her a birthday party because she had left all her old friends behind.

She put on a brave face and said the trip to the local zoo was fine, but she would later tell my mom it was the worst birthday ever. A month later my girls woke up to three small presents under the tree on Christmas morning.

My ex had spent all our money on a motorcycle (in winter) and cigarettes. It hurt so much to look in the eyes of my seven-year-old as she fought back tears and said she “didn’t really want anything for Christmas anyway”. My children were old enough to understand what was going on.

They heard the fights. They saw the hitting. They cried at night in their beds. I could no longer buy them gifts and attempt to distract them from the truth. It was over.

A few days later he had me drive him to his friend’s house so that he could hang out. I offered to go through the drive-through and get him some food. He agreed. I got in the car with my girls and I left. I drove 5 hours north to my mother’s apartment. I hadn’t spoken to her in 4 years but when I called her it was like I never left.

She let me in, and my healing journey began.

I wish I could tell you it was rainbows and sunshine after I left. To be honest 2013 was absolutely the hardest year of my life. Within days my ex took the children out of school and left town. Once again, his mother filed for divorce but in the wrong county. It took me four months, a lawyer, and guardian ad litem just to get the case moved back to the correct county.

I then had to hire another lawyer and another guardian for the divorce proceeding. His mother exploited every legal loophole possible to delay my divorce hearing. Both he and she refused to set visitation with me, despite the court’s request on multiple occasions. The legal system was an absolute failure during this time. I did not see my girls from January 13 until October 31st and only had them two weekends a month until my judgment.

January of 2014 was my divorce hearing. The judge took five whole months to rule on my case and I didn’t officially get custody until May of 2014.

A lot of amazing things have happened to me since I left. I married a real man who is funny, smart, handsome, hard-working and has a heart of gold. He has raised my girls like they were his own, despite their psychotic father still being in the picture every other weekend.

We’ve traveled across the country while I pursue my master’s degree. In 2015 we had my son and I was finally able to stay home with one of my babies and enjoy them being little.

After I left my own abusive relationship, I have helped dozens of women navigate out of theirs.

I have become a victim’s advocate and have attended rallies and volunteered my services to women and children in need.

I am currently recording a podcast with the details of my story because it’s truly unlike anything I have encountered, and I’ve learned a lot about the legalities of domestic abuse and children.

I have always said if I can help one person it will all be worth it. Even though I still struggle with the trauma of my experience, I continue to move forward. Everything happens to us for a reason. I have a story and I will not stop sharing it. I encourage every woman out there to do the same. Your voice matters. You matter. Believe it.

Follow More of Megan’s journey on her podcast, HERE.

To submit your own story of overcoming adversity, see our guidelines HERE.