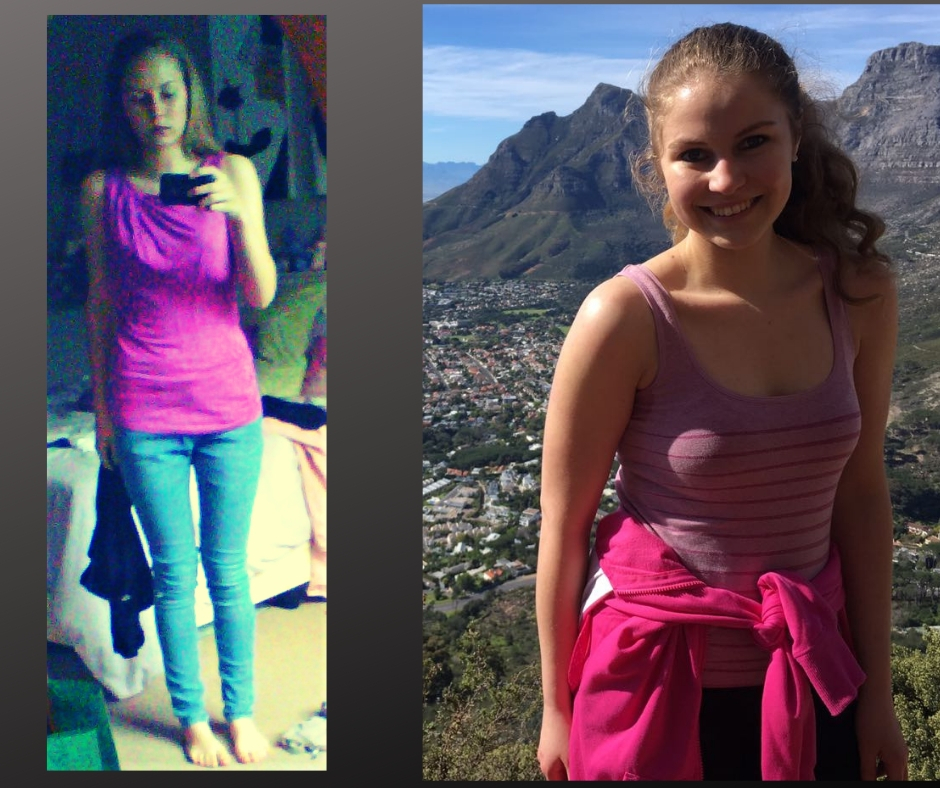 I’ve always been a little chubbier than the kids my age, but I was never very overweight.

I had a normal childhood and did lots of sports in my early years at school. When I approached high school, I stopped doing sports, because I felt like I wasn’t good enough to make any of the teams.

In eigth grade I tried a few diets, but they never lasted long, and I’d always end up putting the weight back on. In tenth grade, I decided to start jogging and eating healthier, just to lose a little bit of weight and very quickly, I noticed the weight began to drop off.

I continued this healthy lifestyle and loved having more energy and feeling healthier overall. I allowed myself occasional treats, so as to not deprive myself.

People soon began to compliment me on how good I was looking and the more compliments that I received, the more my mind told me to keep losing the weight. Though I had lost weight, I was still classified as having a healthy BMI. Very quickly, I began to have really negative thoughts about becoming even thinner and whether or not that meant losing weight in a healthy manner or not, I was determined to get there.

Like many people, I turned to Google on how to lose weight quickly. I stumbled upon websites that promoted anorexic behaviors and saw young girls sharing their diets and tricks that helped them to lose weight.

I began religiously following the ‘rules’ and ‘commandments’ that the websites advised. I then began to drop weight rapidly, and would weigh myself at least twice a day to make sure that I didn’t gain too much throughout the day.

I also began to restrict foods that I thought would make me fat like: bread, sugar, juices, any fats, starchy fruit and vegetables. I tracked every single thing I ate—even a single piece of chewing gum— to ensure that I stuck to my caloric limit for the day.

Each week, I would decrease my calorie intake by 100 calories until I was eating roughly 600 calories a day. I would do weird things like sleep on my left side and suck ice to ‘help speed up my metabolism’. I’d chew gum and drink loads of coffee to suppress my appetite.

I was constantly cold, weak and dizzy and I felt nauseous every morning after waking up. My hair began to fall out in chunks. I soon noticed that I became incredibly introverted and never wanted to leave the house.

I became depressed and didn’t want to get into any social situation that was centred around food.  I began feeling nervous about eating in front of people, as my parents and family would always comment on how little I ate. They would plea with me to eat more, but I’d always refuse and come up with an excuse to not eat.

I remember going out for lunch with friends and telling them that I had eaten before I left home, to avoid eating at restaurants. Then, when I came home and my parents would ask me what I ate, I would make something up just to avoid them from becoming concerned.

I eventually stopped menstruating for almost ten months and my heart began to have arrhythmias. I battled to breathe and my body was constantly in pain. I continually had unexplained bruises all over my body and felt too fatigued to do any physical activity. My lowest weight was 49kgs (108lbs) which is classified as underweight for my height.

One day I went on a school camp which included many physical activities. I was not in control over what I ate and because my body was so depleted of food, and I began to binging on sweets.. When I came home from the camp three days later, I was so famished that I began to eat everything in sight. I then began to feel guilty, and began restricting my calories again.

A turning point for me was when my mom cried over how sick I looked. She was at a loss and didn’t know how to get me to eat more. She feared for my life and my future. I realized that I was only 17 and that I had my entire life ahead of me.

I feared that if allowed this disease to control me, that I wouldn’t live for very long … and my parents would lose a daughter.

I was motivated to change my ways on my own through much research, dedication and family support. I stumbled across a television show that helped to treat people with anorexia. I was amazed that these individuals were able to take control of their disorder and change their lives for the better. I wanted so badly to be like them, so I began to work on my physical progress—but more importantly— I realized I needed to make a mental shift to ensure that I didn’t allow any negative thoughts that I had about myself or my body to rule over me.

I began to gain weight and get healthy, and after four years, I can honestly say that it was one of the best decisions of my life.

I truly have been so blessed by the support of my family and friends who were with me every step of my journey.

Once you realize that everyone’s journey in life is different and that we are all beautiful and unique in our own ways, that’s when you truly know and learn to embrace the differences that we all have.

I have helped and spoken to many other young girls with eating disorders and counselled them since then. I am so passionate about helping people overcome any form of eating disorder, which is why I decided to study Dietetics.

I want people to be open about discussing eating disorders to ensure that those suffering get the help that they need to have a healthy mind and body.*

To Submit your story of overcoming adversity, see our guidelines HERE.

And HERE is an article about Eating Disorder Help, in case anyone is struggling. (I am not affiliated with the link, I just googled. )