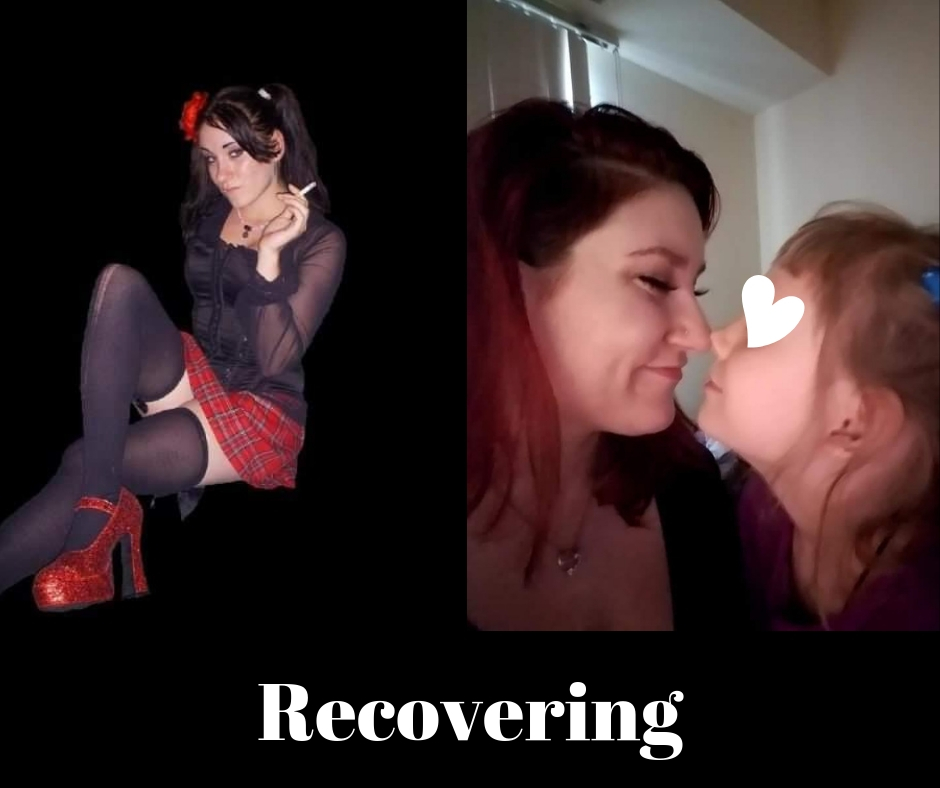 Hi, my name is Dorothy and I am an addict.

Many people in my life, know some of my story, however I have never felt strong enough or brave enough to share it all; until now, thanks to Tiffany and all of the other amazing people that have shared their truths and have inspired me to do the same.

There is a lot, so please bare with me. I will try to summarize it the best I can.

From the moment that I was conceived and in the womb, I was an addict. My parents are both recovering addicts, and my mother continued to drink and do cocaine while I was growing inside her, and continued after I was born.

My father would drink himself into an Oblivion and beat the shit out of my mom. It wasn’t until he broke her nose over my crib, and threatened to kill her and I, that she had decided it was enough.

She left in the middle of the night and for some time, we stayed with my uncle.
My mom, some of my family members and the company they kept, were all party animals and in bands. It was a constant party.

My mother is a talented singer and would have band practice wherever we lived, and everyone would be completely wasted and high on coke, and various other side substances, I’m sure.
I always thought this was normal, until I was old enough to learn that not everyone’s life and family was like this.

As a child, I always felt I had to be the adult, the responsible one, without even knowing the full toll it would take on me later on. I remember at a very early age, I would worry when putting my mother to bed in her drunken stupors, making sure she wasn’t sleeping on her back.

The very first time that I remember really feeling invisible and worthless, I was no older than three. I was bit on the chin by my uncle’s Bull Mastiff, about fifteen feet from my mom, and immediately I began sobbing as my face blood gushed from my face.

I was in pain and a mess and needed my mom to help make it better.

I ran over to her where she sat on the couch, drunkenly playing her guitar and singing loudly (one of her drunk phases was to sing and play records loudly). She looked at me as I stood inches from her face crying, covered in blood, and she didn’t say a word. She didn’t react, she just sang louder in my face, her face twisted up like it would whenever she was smashed.

I had to climb onto the bathroom sink to see in the mirror and reach the sink to wash and wipe the blood away myself. I felt so alone and thought I was without love and that it must be my fault (children never blame their parents, but instead themselves as I have come to learn from therapy); a feeling that would be all too familiar to me as time went on.

Anyways, this would be the theme to my childhood and growing up, being the most adult person in a room full of adults; watching fights in the trailer parks, always terrified of dying when my mom would insist on driving obliterated, ya know, the usual.

I would bond with my friends’ parents to try and feel some normalcy, but was always too afraid to stay the night, as I had a sense of belonging at home to care for my mother.

I was always embarrassed to have friends stay over my place, and usually when they did, it would make me a joke at school because of my out of control mother. If my friend’s didn’t talk about it to everyone, there would be those who came over just to laugh at the spectacle that was my life.

As a child and up until I was 14, I was against drinking, drugs and cigarettes. I hated it and resented those around me that used.

I was 14 when I first had a cigarette, marijuana, alcohol and actual sex of my own choice (I was sexually molested at age 4-6).

After dealing with the pressure of life and hating my existence, I decided screw it, I will try all of those things because I had intended to die soon anyhow. Might as well see what the fuss was about, right?

I had been cutting and burning myself for a while to try to cope with my anger and sadness. Once that wasn’t enough, I decided after school I was going to kill myself. I took every pill that we had in the medicine cabinet, Tylenol, ibruprofen and NyQuil. I laid in my bed and thought about all of the mental, emotional, physical and sexual abuse I had endured in my 14 years. I closed my eyes with a serene smile and felt content knowing it would all soon be over.

I failed at ending my life. Just as I failed at everything else in my mind and as a result, I was in individual and group therapy. I hated it. I hated how I was spoken to and disregarded and how it didn’t matter what troubled me, what led me to trying to commit suicide or that I adorned scars up and down my arms and legs. Nothing changed. None of my problems went away. However, I would soon discover ways to numb it all. This was a game changer.

I would soon start doing just about any drug I could. My drugs of choice would become ecstasy, cocaine, shrooms, acid, and pills of all kinds (mostly Vicodin as it was easiest for me to get). All of my friends for the most part knew I partied and messed around, but none of them, even my closest friends knew the actual severity of it.

I fooled everyone into thinking it was all social and I had it all under control.

No one realised that I was doing whatever I had to in order to get money and that I had a real addiction. I would have small moments of sobriety here and there throughout, trying to get clean to make my papa (my grandpa) proud, as his opinion of me was the only one I cared about.

I manipulated, lied, and hurt people. I would date certain people based on their access to drugs or money. I put myself in some very precarious situations that I still try to wash myself clean of.

Being numb was better than having to feel anything, any emotion, even happiness.

The tolerance I had built up to drugs was so high, that I was taking what is usually considered a lethal amount. From age 14 to age 21 I was on a mission to be numb or die. Every night was a blur and a party.

Thinking back on it all, I don’t know how I survived the many dangerous scenarios I found myself in, and I don’t know how I managed to not be thrown in jail. I felt like the world’s greatest con artist. No one knew, and if they did, they never said a word.

I used to think that I got away with it because I graduated at the top of my class, and got scholarships and worked and rented my own houses and on the outside, looked like I had it together. I honestly now, think it was just pure luck and if what was soon to happen, didn’t, I could almost guarantee that I wouldn’t still be here to write this.

I was 21 when I finally stopped everything with the aid of Suboxone and some very horrendous withdrawals. I still have what I call “Swiss cheese” brain from the E, broken/awful teeth and gum damage from all of the grinding and chewing, and issues with my Seratonin levels.

One day at work, during withdrawals I was so horribly sick and, convinced I was dying and sick with pneumonia. I went to the hospital so the Doctor could take an X-Ray of my lungs, but before we went back, he came in to tell me that he couldn’t do the X-Ray… as I was pregnant.

My jaw, my stomach and my heart sank. I couldn’t be a mom! I couldn’t possibly be in charge of a child when I’ve only just begun working on getting myself together. What if I failed the baby?! What if I ended up just like my mom?! I couldn’t bare the thought of doing that to another human.

A couple of months into the pregnancy, I was healthy, and still clean, and couldn’t stop the overwhelming love I had for this tiny human that I’d not yet met! What was this feeling I had?! I hadn’t felt this before, not on this level. I was overcome with emotions as I realized that for the first time in a long time, that there was nothing I wanted more than to stay clean so that I could be the most amazing mother I could be!

On June 17, 2011 I welcomed the most beautiful, big alien-headed, healthy, little girl into the world and was born anew with her.

She has brought so much joy to my life. So much light in the darkness I had known for so long. Nothing mattered to me anymore in that moment other than her and my sobriety. For the first time in my life it seemed, I wanted to live and fully embrace my new chapter.

My mom, who I’d never seen sober my whole life, stopped the coke , cigarettes and the alcohol and is still clean to this day, nearly 8 years later, and I couldn’t be more proud.

We actually have a proper relationship now which we never had before. I had told her it was either she get clean or will never see or know her granddaughter and although I didn’t think she would since she never chose her own daughter, she chose my daughter and sobriety.

Today, I am sober for over three years. I see a therapist and psychiatrist weekly that I actually like and feel confident in. I have been properly diagnosed with PTSD, Anxiety, depression, bipolar, fibromyalgia, trichotillomania and life threatening OCD. I am getting the appropriate treatment that I have been needing all of this time, which makes a huge difference.

Having sources of those I can talk to, support systems, and of course Tiffany Jenkins and all that she’s made possible, has made a world of difference for me and I couldn’t be more thankful to have another day, another chance.

All we can do is keep breathing.

Don’t ever give up. Only you know your truth. You are worthy and you’re so much more than you could ever realize. We are the authors of our own stories, our own life, and every one out there struggling, you need to know that you are strong and capable and that people do care. You’re not alone.
Addiction doesn’t define us.

To submit your own story for consideration, click HERE:!