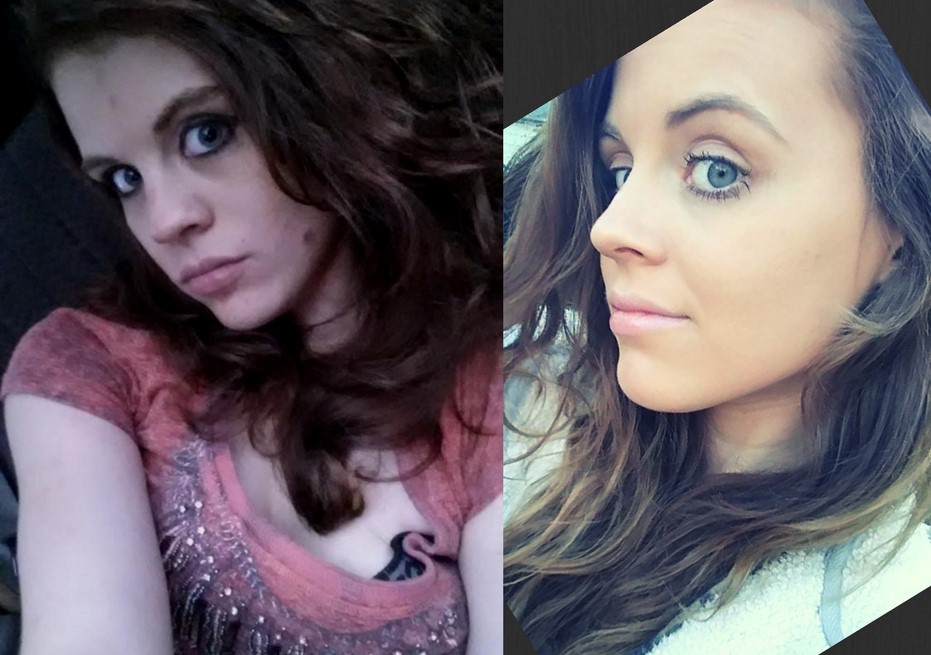 I knew from a very early age that both of my parents were addicted to drugs.

By the time I was fourteen my mom had left us to go be with some guy. When I was seventeen, a senior in high school, my dad was handed four –  99 year sentences.

Despite this fact, I was still able to graduate with honors. I was living with my older sister at the time, and everything was fine up until the point that her abusive boyfriend gave her an ultimatum, she had to choose between him, or me.

I came “home” to a locked door, and my belongings sitting out on the front porch.

I felt like my entire family had abandoned me. I had struggled with depression for quite some time and usually ended up resorting to cutting myself just to ease the emotional pain I was dealing with. A short while later, however, I found a new way to cope.

I was dating a man that was eight years older than me, and fresh out of prison. He was my first real boyfriend. I had always been the innocent girl, and he was the bad boy. We were in love, and I was desperate not to be left by yet another person I loved. So, when I found out he was doing Meth,  I couldn’t say no. He might leave. At 18 years old I started my relationship with Meth.

My boyfriend and I had been together for four years, and at age 21 I found out I was pregnant, and I stopped doing drugs completely. He didn’t.

A month after our baby was born, he ended up going out and shooting a woman, almost killing her.  He was sentenced to 40 years in prison.

Once again, I found myself alone…abandoned. I turned back to Meth just to help me get up in the morning. It was the only way I was able to get anything done.

My boyfriend had been working for the landlord of the house we were living in, in exchange for rent and now that he was in jail… I was told I had to move.

I moved in with my boyfriends mother, but months later when she found out I was seeing someone else—she kicked me out. I had no where to go, so she kept my daughter.
Next she took the car away from me that was hers. I had been paying to use it every week so I could get to work. Without a way to work I lost my job.

In the span of just a few months, I had lost my boyfriend, baby, house, car, and job. My addiction was really taking over, and would end up ruling my life for the next three years.

I stayed here and there bouncing between my sisters, grandmothers, uncle’s (who was a dope dealer) and “friends”. I spent countless nights hungry, and freezing cold in my old jeep with nowhere to go.

On March 16th of 2016 I was tired, and I couldn’t take it anymore. I walked up the stairs in the house I’d been staying at and took over 60 of the pills that I had been prescribed for depression and sleep.

I woke up unable to see, or feel my body. Next thing I know I’m waking up in the hospital. I was in and out of consciousness. My whole body jerked spontaneously for three days afterward and I could hardly walk because my legs had very little feeling in them. Luckily, this wasn’t permanent.

I was sentenced by a judge to go to a mental hospital for up to fourteen days. I was considered a danger to myself and others. At the mental hospital I was diagnosed with Borderline Personality Disorder—which explained a lot, but after eight days I was released… and I went straight back to the drugs.

May 27th of 2017, I was 24, out of dope, out of ways to get it and feeling incredibly hopeless. So I did something I hadn’t done in a long time. I turned to God for answers.

I asked God, “Why does everyone leave me?” and he said, “I will never leave you. I love you.”

“How could you love me Lord?”

“You’re my child. I love all my children.”

I broke down and decided right then and there that I had to put those days behind me. Now, almost a year later… I’m still clean.

I am an active member in church, and for the first time in a long time, I’m happy. I’ve also realized that I’m not alone. That I never was. I’m pursuing a relationship with my daughter, and have mended relationships with family members. With God anything is possible, and he will love you no matter what.

Each week I like to share stories of recovery, in hopes of inspiring those who are struggling and losing hope. There is no such thing as a lost cause, and the stories in this series are proof of that. Keep hope alive.

I have written a book about my own dark journey through addiction and out the other side. It’s available on Amazon HERE.

If you’d like to submit your own story, check out the guidelines for submission HERE.

WE FINALLY HAVE RECOVERING BEAUTIFULLY T-SHIRTS IN THE SHOP! Get yours HERE!