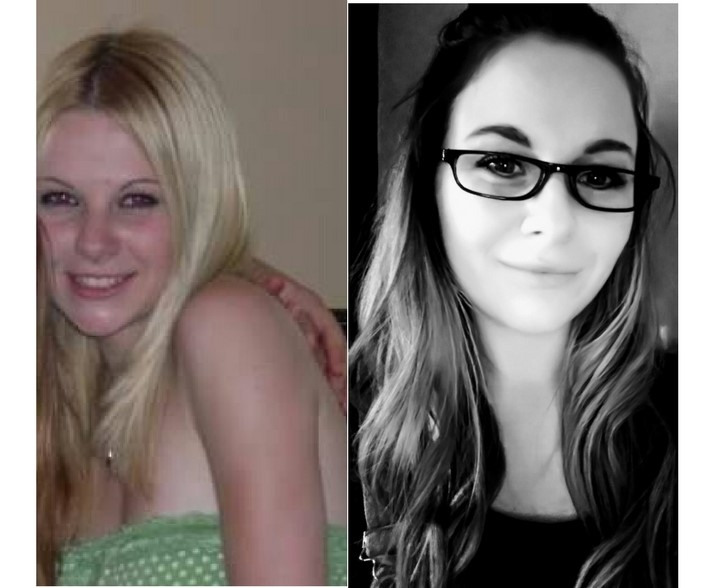 When I was one year old, my dad was a high rise window cleaner and my Mom, a school bus driver. We owned our home, paid our mortgage, visited with family and lived a fairly normal life.

Until my dad did not strap himself in, and fell off of a high rise building. Fortunately he landed on another building and it saved his life, giving me the opportunity to know who my dad was… Sort of.

He broke his back, which left him partially paralyzed in a bed. He was told he would never walk again. We lost our home because a school bus driving job wasn’t enough to support three kids, a house, and husband.

Two years later, he was able to walk again after physical therapy, but he was also prescribed a pill that is no longer even legal where I live.  I spent the rest of my childhood watching my dad fall asleep at random places. He would light a cigarette, fall asleep until the cigarette became a butt, then he would put it out and light another—only to start dosing off again.

This would happen again and again; lots of blankets had burn holes in them from him passing out with a smoke in hand.

When I was thirteen my mom pulled me to the side to tell me that I wouldn’t be seeing my dad as often…That she’d found out he was abusing his medication as well as other drugs, and that she given him an ultimatum—family, or drugs. Guess which he chose? The news devastated me, because even though my dad was an addict, we were extremely close.

I was thirteen when I tried smoking pot for the first time, and I continued to every day for the next six years.

I was offered Ecstasy at a party and that quickly became my favorite drug. At the young age of thirteen, I loved how confident Ecstasy made me feel. Suddenly I was crushing up any pills I could get my hands on and snorting them.

My life quickly spiraled out of control. I spent my first years of high school skipping classes, bullying, doing cruel things to my mother, brothers and friends. I was no longer myself, instead I was an angry monster that couldn’t go a day without pills. I put my mother through hell and embarrassment when she’d come to the school after I overdosed and she stayed overnight in the hospital with me.

I didn’t think it was a problem. I thought I was only having fun, that I was just being a rebellious teen.

The scary thing about pills is, they are very easily accessible, and that makes quitting a hard thing to do. I had to go through counselling sessions at school, where I spoke to a counsellor about drugs and alcohol, and even though it wasn’t any help, I commend the school for at least trying.

It had been about a year since I’d last seen my father, when he suddenly came home to get clean. I watched him withdrawal, and it was the worst sickness I had ever seen. He looked white as snow and I could hear him throwing up morning until night all around the house. He was in incredible pain, a miserable aching pain that looked awful to experience. Eventually, he was finally clean.

You would think watching this with my own eyes would have changed me…but it didn’t. It’s sad to think about now but I was actually taking the very pills my father was getting clean from. My parents struggled with their relationship after everything that happened. They ended up breaking things off and my mother and I moved from our small town to a small city.

I became pregnant at sixteen and decided to have an abortion, because my boyfriend was abusive and I had taken too many drugs and drank a lot of alcohol, so I was worried about the baby. This was a loss to me, I took the abortion really hard. Instead of turning to drugs however, the experience pushed me to take control of my life again and quit all the hard drugs I was doing. That was my first rock bottom.

As most addicts, I quit one addiction only to start a new one… Weekend partying became weekday drinking. At least with drinking I was able to hide the smell and still attend high school classes. At seventeen my best friend passed away and I grieved her loss by getting blackout drunk. I would go on rampages and attack my friends, to not remember it in the morning. I lost a lot of friends because of this. I will live with this guilt forever…we should have all been leaning on each other during that time.

This life of being a drunk continued for a few years. I was in a relationship where I was beat so badly he bit threw my lip and shattered my hips, all while being blackout drunk.

I graduated high school and started working at a coffee shop. I would go to work and then get off and drink. Every. Single. Day. I even recall a time where I took shots in the bathroom at work with a coworker.

A regular who came through the coffee shop often asked me to meet his son…after a few weeks of awkward conversations, I eventually did meet his son and we instantly connected.

He helped me recognize my enablers and he pointed out my drinking habits, while he encouraged me to follow my passion and go to college. I didn’t think I was good enough for college but I decided to go.

Once I was around different people studying something I loved, my life changed. I finally felt like I was smart. That I was good enough. That I could be a helpful member of society.

My second rock bottom was another blackout night. This wasn’t anything new, it started with a video chat where a friend and I took shots by ourselves while talking over a video call, and it ended with my boyfriend leaving me. I acted a fool for the last time, I embarrassed myself, and someone I cared deeply about, and enough was enough.

I will never forget the conversation I had with my mom where she told me, “This guy is the best thing to happen to you, change your life for him”.
He only asked one thing from me, that I quit drinking.

I started to distance myself from my old friends and focused on growing as an individual. Two years later and after a lot of hard work, I graduated college. I found that focusing my attention on something else kept my mind busy.

Soon after I graduated college I found out that my Dad left this earth. I knew he was sick, he had recently lost feeling in his legs and was put in a wheelchair. I believed this was because of MS. It wasn’t until I was on my way home from the funeral that I found out my dad wasn’t clean; he was still using. I always questioned his sobriety but couldn’t ever be sure.

His best friend gave me my dad’s almost dead cell phone. Running on no battery I read the texts he sent to his friends begging for drugs… His last days on earth were spent begging for drugs. That’s the reality, drugs will take your life if you don’t take it back first. I could have done what I always did so many times before when something terrible happens… I could have turned to alcohol, drugs or food...but I didn’t.

Today I am here as the best version of myself and I am so thankful because that is what my husband, children and myself deserve.

Now, I’m actually thankful of my past. It still haunts me, yes, that is the downfall of being an addict. The people you hurt will never forget, the reputation you created will not just disappear. No matter how much you change, people from your past will always look at you as that same person. Those are the consequences that I now face and hopefully hearing that will encourage you to not do the same. I am thankful though, I will be able to tell my daughter’s that their mother has overcome unreachable obstacles – anything is possible if you work hard enough for it.

Each week I like to share stories of recovery from people in the community. Whether it be; drug addiction, alcoholism, sex, food or gambling addiction—the more we speak our truths, the more shatter the idea that all addicts, are lost causes.

? If you’d like to submit your own story, check out the guidelines for submission HERE.

? I wrote a book about my own dark journey through addiction, order it HERE.

?  I want to make it my life’s work to put a face to addiction and inspire those who feel hopeless. If you want to check out my Patreon and support the cause, (No pressure, for real, just throwin it out there. Now I feel weird. I made it weird. Sh*t) it’s HERE.

A Life After Addiction IS Possible… We Are PROOF.