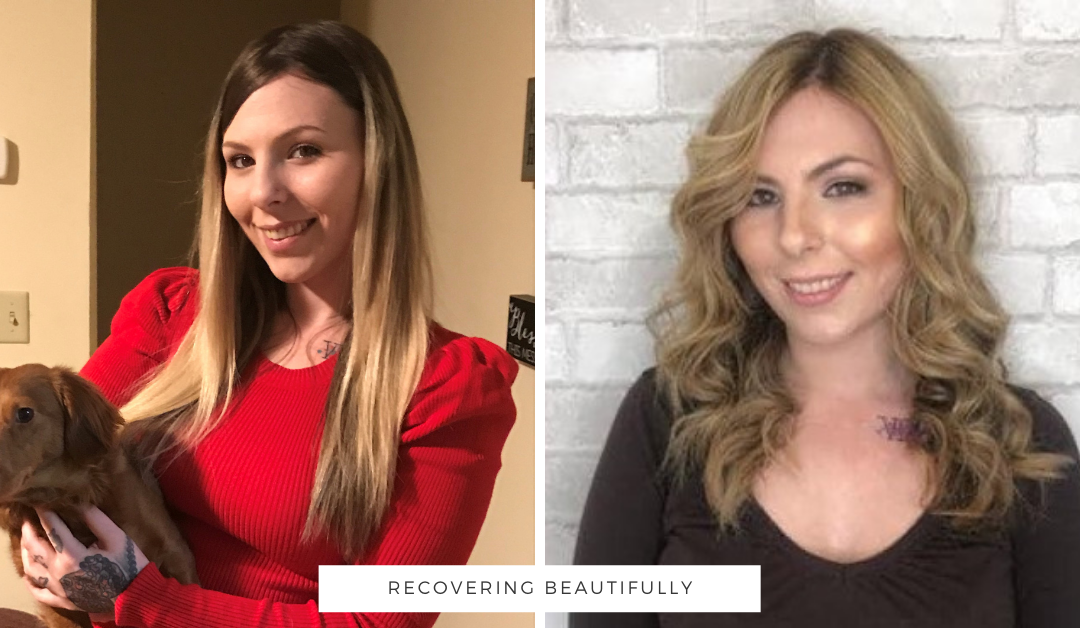 I grew up with a loving family. We lived in a nice neighborhood and had everything we wanted and needed. The only thing that was different in my family, was that my father was not in my life.

When I was a year old my father went to prison for the first time for selling narcotics. I struggled with my father’s absence since I was about 5 years old. My dad was in and out of prison up until a few years ago. It was in my teen years that I started to realize that I had “daddy issues”.

When I was 14 years old I got pregnant with my son. I had him two months before my 15th birthday. His father was my high school sweetheart, and he was a great dad. I loved being a mom, but I had no clue what I was doing. I was the only girl in school that had a baby and my social anxiety got worse every day.

At sixteen I met a group of older girls and started to try drugs like ecstasy and cocaine.

I hid it for the first year, my parents didn’t suspect a thing. I would be out late at night sniffing lines and drinking with my group of friends. At 17 things started to go downhill. I tried crack cocaine for the first time and was hooked. I didn’t use every day, but when I did it was large amounts.

One day I was with a friend and a dealer and had a seizure and passed out. I remember waking up not knowing what happened and ran out in the snow and called 911. I was admitted to the hospital and they had to call my mom to tell her. I was so ashamed and still didn’t want to admit I had a major drug problem.

The hospital referred me to an adolescent rehab for 28 days. I didn’t take the rehab seriously, and couldn’t wait to leave to get high again.

At 18 I tried heroin for the first time and loved it. At first, I would sniff it, and I hated seeing my friends shoot up. Months later, I had my best friend shoot me up, and I didn’t stop.

I went to 9 rehabs and detoxes, and barely completed any of them.

My mother had guardianship of my son, and I felt like a complete loser. I started dating drug dealers to support my habit and started stealing from stores so I could pawn the items. I was catching petty larcenies, possession charges and DUAI’s all the time. I would get pulled over with drugs in the car, or get caught stealing.

The day I got arrested for my DUAI, I took way too much Xanax on top of my methadone dose and the heroin I was doing. I took someone’s car and was heading to town to get crack. I passed two people on the right and a cop pulled me over. I had no care in the world that I could have just killed someone or myself. Addicts are selfish, and I didn’t think twice about hopping in that car.

I would get on and off methadone programs and get kicked off for using drugs.

I honestly didn’t want to stop. I only got on the program so that I could try to fool my family into thinking I was clean. I started to date an old friend who didn’t use drugs. It was great at first, and then he found out I was still using.

He dealt with it for months and then started to use behind my back. We started to use together, and my life went from bad to the worse it had ever been. We would get kicked out of places we were staying and had nowhere to go. He lost his job and we had no way to get high. All I wanted and cared about was getting that next hit.

We began staying in hotels, and I started to escort. I would put myself in dangerous situations and I would do anything to get paid. It was a degrading job, but it paid the hotel rent and kept both of us high. I didn’t care about consequences and I definitely didn’t care who knew what I was up to.

This was not how I planned my life to be, but I felt stuck.

I felt like this was the only way I could make fast money and have enough to get high every day. I liked having thousands of dollars in my pocket and being wanted. It makes my stomach curl to think about those days.

I met my now-husband shortly after doing this but I didn’t think it was going to go anywhere. I really liked him, but I was still on and off with my boyfriend and he didn’t know I was still using. I was so scared to tell him. Eventually, I packed my hotel room up to officially go and be with him and left my boyfriend for good.

The day we got together we were pulled over because I was stopped at a green light for too long. I had no license and drugs in my wallet. The look on his face as I was getting pulled out of that car is something I will never forget. He was devastated and shocked.

He knew I had bad track marks, yet he was very oblivious.

He bailed me out of jail that night and I still continued to use. He couldn’t deal with the drugs so he left. We would come back together every few months but I still wasn’t ready to stop.

After a few more jail stays, we finally got back together. I was still using and out on bail. I saw how bad our relationship was because of the drugs, and my son was getting older. I wanted to be the mom he deserved and the girlfriend Danny deserved too. I so desperately wanted my family back in my life too.

I overdosed twice in two weeks and I knew if I didn’t stop I was going to die. My son would be motherless. I went to the same rehab I went to when I was 17, and I was scared to death. I didn’t know how to be clean, I didn’t know how to cope with my feelings. While I was there I opened up to the counselors, which is something I never did before. I learned so much about myself and for the first time in my life I actually wanted to stay clean.

It wasn’t easy when I got out.

I slipped a few times but stopped early before it got deeper. I started an amazing outpatient program and graduated early. For once I was proud of myself. I accomplished something. That was a great feeling. I started to rebuild my relationship with my son, and it felt so good. I missed out on so much with him, and I never want that to happen again. He was so happy to have his mommy back in his life.

I got married on April 13th, 2019. Danny didn’t want us to get married until I had my ducks in a row. He wanted me to earn his trust back and show him I could really stay clean. I am now 11 credits away from graduating with my human services degree.

I have always wanted to help people, even though I couldn’t help myself. I am going for my CASAC to help recovering addicts after I graduate. I want to help people realize that they aren’t worthless and that anyone can change their life around. I also just recently passed my road test and got my license back after it being revoked for years.

Being sober has changed my life in so many amazing ways.

I never thought I could accomplish my goals. I thought sober life would be boring, and that I wouldn’t have any fun. I was so wrong. I laugh more now than I ever did before. I have a sense of pride that I never knew was possible.

If you are struggling, please don’t give up. There is hope.