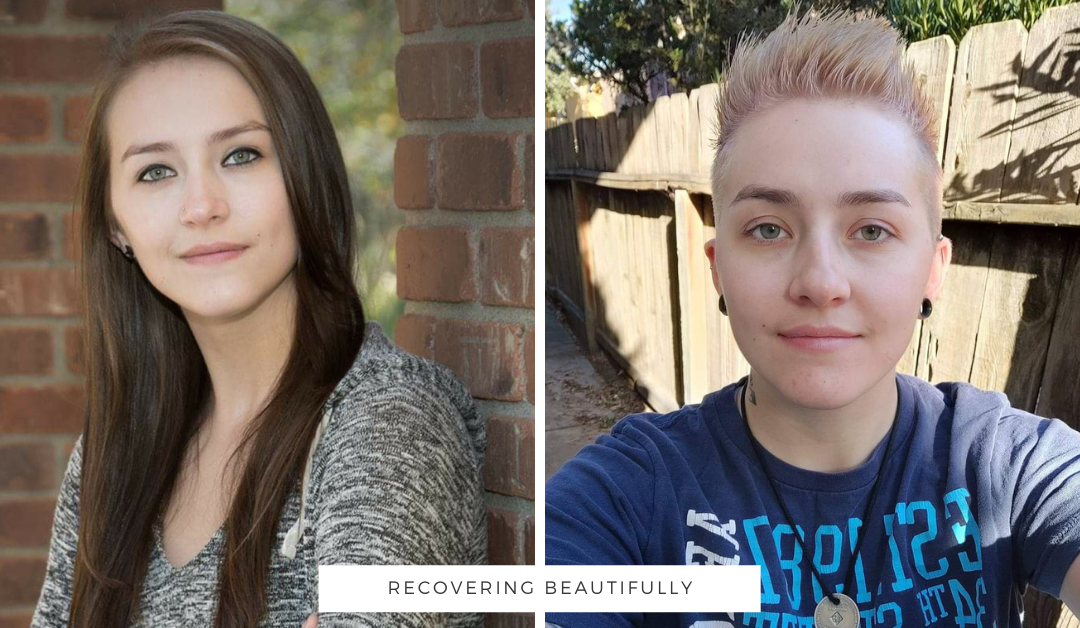 My name is Alexis. I’m 23 years old and have almost 2 and a half years clean from drugs and self-harm. My drugs of choice were heroin and cocaine.

I grew up in a middle-class family in Colorado and had everything I needed. All was well on the outside, but inside I was wasting away. Although my parents were checking all the boxes, they weren’t there emotionally and I had no outlet. I watched them in their cycles of codependency and functioning alcoholism, learning how to live with all the wrong examples. It was no surprise that my first break-up served as the catalyst to my downfall.

At 15, I started drinking, smoking weed, and self-harming.

By 17, I had scars all over my body and was snorting cocaine before class after driving home at lunch to take a few shots of my mom’s vodka.

At 18, I tried heroin for the first time and met someone that I thought was going to save me. Either that or that I could save him. He had been an IV user for 4+ years but I was too blind to see the evidence of what it had done to his life. I fell in love with him and in turn, with heroin.

We used together for months and if I’m honest, it was the best time of my life. Until I got out of class one day and his roommate told me he had overdosed and died that morning. My world crashed down around me, again. I was no longer using for fun or for social assimilation; I was using so I didn’t have to feel.

My codependent, narcissistic, wallowing identity thrived on the pain and used it to fuel my addiction.

I started slamming heroin and cocaine daily only 5 days after my friend’s death. My parents were busy stressing about their own lives and didn’t ask, but I knew they suspected. I hid things well but eventually, I couldn’t any longer.

I was sick on the couch for the three hundredth time that year and my mom was still buying that I had the flu. I couldn’t take it anymore and I told her I had been shooting heroin and cocaine for the past 10 months and was now withdrawing. All of a sudden she had the strength to give me an ultimatum: move to California with your dad to get clean, or move out and be homeless in the middle of winter in Colorado. Needless to say, I didn’t have much choice.

Two days later, I was driving the 22 hour trip to California with two suboxone left and my entire childhood in the trunk. I did well at first (mainly for lack of connections) but eventually succumbed to my addiction once again. I ended up in a military-style rehab in San Diego for two months and put together four more months of clean time after that. But the curiosity still raged within and I thought I could try it one more time and then be done.

Funny how we think we can control that shit.

It was on and crackin’ for another few months until I hit bottom once again and was homeless, losing my partner, and slowly breaking the bonds with anyone who ever cared about me.

I knew that my next stop was prostitution, robbing, and eventually suicide by overdose. A small voice within me that I now know was my Higher Power gave me just enough wisdom to go to the one place I had ever felt truly listened to and loved: Narcotics Anonymous.

Whereas before I had used meetings as a way to find connections, this time I jumped in headfirst because I had nothing left and no other ideas. I saw people with years clean and houses and careers and smiles on their faces. I didn’t know how they were happy without any substances flowing through their veins but I did know that I wanted what they had internally and externally.

Here I am a little over two years later and I now have that happiness along with so much more.

I have my own place, a cat that is my best friend, a huge support group made up of NA members and family, a car, a motorcycle, a career in the recovery industry, and my AA in Addiction Treatment Studies.

I know my passion and purpose in life is to give back what was so freely given to me and I do that in every aspect of my life. Don’t get me wrong, I still struggle mentally and emotionally with triggers to not only use but to self-harm. But I have tools today. I have people I can call. I have hobbies I can use to distract myself. And most of all, I have a Higher Power’s strength that I can draw upon at any time.

I don’t use NO MATTER WHAT. I have more gratitude than I can say and I know there is only more to come. I owe my life to Narcotics Anonymous, my Higher Power, and to myself and the tremendously difficult work I have done to get where I’m at today.

I hope this brief glimpse into my recovery journey can help other people see that it is possible to get and stay clean and not harm yourself or others in the process. You just have to be willing to do the work. Life is fleeting and so precious and I am not gonna waste a single second of it.