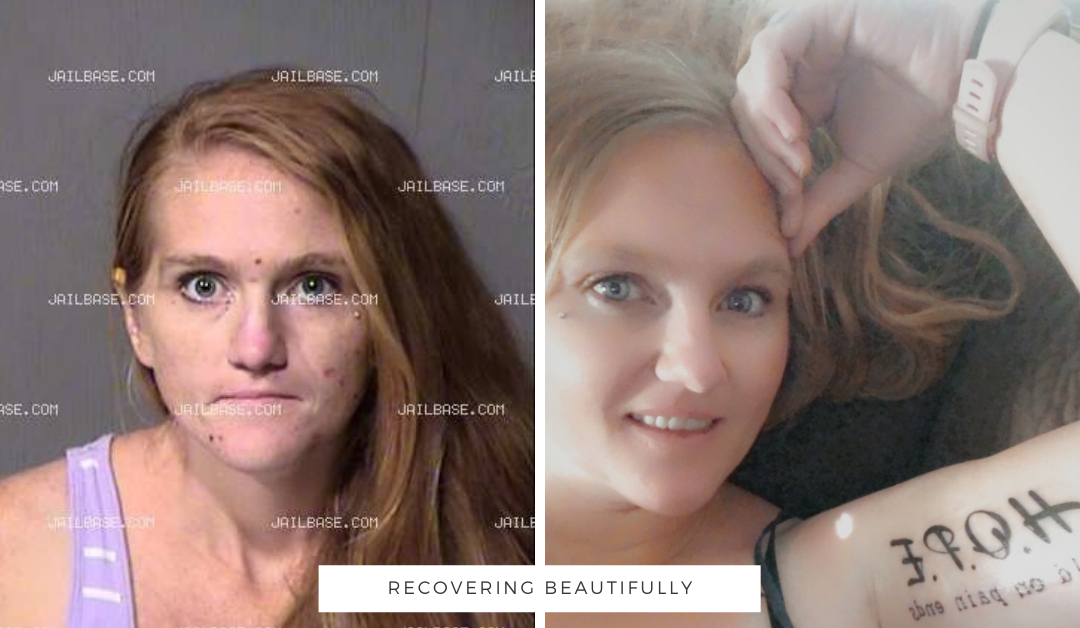 As I sit here in prison, I think back to when I was in my addiction and how I thought I would die using. I couldn’t imagine myself ever getting sober.

I am so thankful for my Higher Power (God) for letting me live after twelve overdoses, being in the hospital with MRSA in my blood and lungs, and surviving countless dangerous situations while homeless. I am also grateful to Him for putting me in this “time out”.

Before being introduced to drugs, my first addiction was self-harm.

I started cutting when I was thirteen years old due to depression, not feeling right about myself, and after being molested and raped. After about a year or two of cutting, I started drinking and using drugs.

When I was seventeen, I got really bad on meth. But I quit cold turkey when I found out I was pregnant with my son. After my pregnancy, I started drinking every single night.
​

A year later, I was introduced to oxycodone. A doctor prescribed it because of a toothache. I quickly fell in love. During the next two years of my oxy addiction, I had my daughter, got married to the man who introduced me to oxy and moved from California to Arizona. After a year of living in Arizona, my husband talked me into using heroin instead since it is so much cheaper.

​My life went downhill from there. My kids and I were living with my mom when I first started using needles. She quickly found out, gave me a couple of chances to stop, and when I didn’t, she kicked me out and kept my kids.

At that point, I honestly didn’t care if I lived or died. I was so reckless in those first six months that I overdosed ten times. For the next three years, I was in and out of the hospital and jail. ​
​

I was finally arrested for the last time in October 2017 and sentenced to four and a half years in prison.

A little over a year into my sentence, I was clean, but I wasn’t working a program or doing anything for my recovery. When my closest friend moved yards, I was so upset that I immediately wanted to get high.
​

I found a sponsor and got into a twelve-step-based recovery class that they offer on the yard called, “Wellness in Recovery.”

After that, I took the twelve-step recovery-based class called, “A Way Out”. Three times I’ve been asked if I would become a facilitator, and I gladly accepted.
​

On top of being a facilitator, I am also a sponsor and a grand sponsor. I am so lucky to have the privilege to watch women transform and grow in their recovery and to help them along the way.

I am so grateful for what Heroin Anonymous and the steps have given me! Yes, I am in prison, but I have never felt as free as I do now. Aside from my freedom, I am genuinely happy. I have peace in my life.

I love myself, and I actually have hope for my future.

I made a promise to myself that I am going to help as many women as I can while I am here. I want them to have the freedom and sense of serenity I have gotten from this program.

​I get out of prison in three months. As scared as I am, I am also ready to get back to my two children and family. I have worked very hard to find out who I really am and to become the best mother, daughter, sister, and productive member of society that I can be.

Once I get out of prison, I am going to become a recovery support specialist, so I can continue helping those who are still struggling with their addictions. I cannot wait to be a part of Heroin Anonymous in the real world.

One of my goals for the future is to get into H&I, so I can bring meetings into the prisons and county jails once I am allowed to. I want to show prisoners that they can turn their lives around while they are locked up. Like I did.

My life has purpose and meaning again.

Author’s Update: So I wrote this while I was still in prison. I have now been out of prison for 8 months. I’m still going strong in my recovery! February 15TH I celebrated 3 years of sobriety! I have my kids back! I have a job and a car! Every Saturday my oldest and I are a part of a homeless outreach! I give back to those that are in positions where I once was.