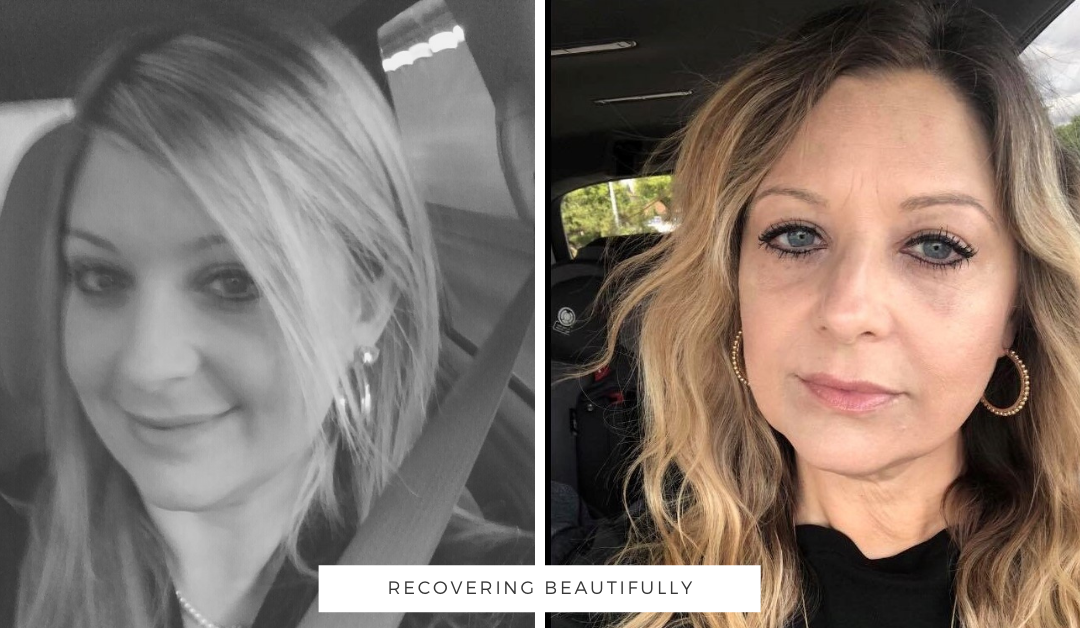 The phone rang. It was an insurance estimator asking to make an appointment to take a look at the damage on my vehicle from an accident the previous day. I told him that I didn’t have an accident. He told me that, actually, I had reported a couple of separate accidents within the same week.

We confirmed all of the normal stuff like name, vehicle, etc. I asked him where the damage was reported on my vehicle and walked out to the garage to check on my car. I arrived in the garage only to confirm that my car was definitely not ok. I dropped the phone, ran up to my room, and hid in my closet, terrified.

I wracked my brain, but no matter how hard I tried, I couldn’t remember those accidents.

I could only assume that I had somehow relapsed (I was an addict with six years sober) and blacked out. And that was why I did not remember anything. But not even remember the first drink? That was a long shot. But it MUST have happened.

I was devastated. I had six years sober and my family had just recovered from the damage of my severe drug problem. And now this? The enormity of the guilt, shame, and disappointment was piling up. I was so uncomfortable in my own skin again and confused beyond comprehension.

From the closet, I heard a loud knock on the door. I knew that it was definitely the hard knock of a police officer. I ran down the stairs to discover that I was right. I opened the door slowly, wide-eyed, wondering what horror awaited me now?

Did I kill someone and I didn’t remember?

My kids, where were my kids? Did I even know? Was my memory of dropping them off at school that morning accurate? I just stared at the officer through the screen door. He confirmed my name as I shrunk back behind the door, hiding from him, only letting my eyes and nose peak around.

He was a detective there to take a report on a domestic violence incident that I had reported a couple of nights ago, at the hospital, against my current boyfriend. I just stared at him, and he asked me if I was ok.

There were few things that I could put my money on in life, but I knew for sure that my current boyfriend could not, would not, and did not beat me up.

He just was not capable of that.

Confusion…Chaos…This was definitely a bad dream. It had to be. But then the cop cleared his throat and brought me back to reality as I silently screamed at myself to wake up!! It wasn’t a dream.

He asked me to tell him what happened. I told him there was some mistake, and he assured me there was no mistake.

I refused to answer any questions, and he told me that my non-cooperation would not keep the DA from arresting and charging my innocent boyfriend. I shut the door and ran back up to the closet petrified. (That boyfriend ended up not getting arrested. Nor did I tell him about his almost arrest until years later.)

Six car accidents, a surgery scheduling meeting for work, a trip to the ER as a result of false domestic violence, and kicking my boyfriend’s door multiple times…

These are all of the things that I could not remember.

I picked up my kids from school and they seemed unaffected by the twilight zone that I had woken up in. I called in sick to work. I made a doctor’s appointment and decided that I needed some time off to figure out what happened.

Clearly, I had relapsed hard, maybe on alcohol or pills. Yet the only evidence of my relapse was loss of memory; there were no empty beer cans or pill bottles anywhere. Trust me I searched.

I started calling people in my support group and telling them I had relapsed.

I told my doctor, my psychiatrist, and my poor kids. Just when they finally felt safe with me again, here I was trashing their lives. Again. I’ll never forget the disappointment on their faces.

I called trying to get myself back into rehab, but because I didn’t have answers about my supposed relapse, they would not accept me. My psychiatrist, at the time, told me I needed to check into the mental hospital. Clearly, I was in a crisis of unknown origin. So off to the mental hospital, I went.

Long before this incident occurred, I was diagnosed with bipolar disorder aka manic depression.

Patients with this diagnosis have bouts of depression followed by bouts of mania (high energy and excitement.) I guess we will never know what came first, the chicken or the egg?

Did the drugs make me bipolar, or did the bipolar disorder cause me to do the drugs?

Did the tragic murder of my husband cause a chemical imbalance in my brain, or did the long history of mental health problems in my family all come together within me? Yes, I’m a real piece of work.

When I was initially diagnosed, I was in complete denial.

I had gone to the doctor while I was attempting to detox from drugs and was looking for some anxiety medication (legal drugs) to help me cope with the unpleasant effects of coming down from illegal drugs. I left with a diagnosis and some medications that I never took.

My drug abuse resulted in a CPS case and the court found out about that diagnosis. The court ordered me to seek treatment and take all of my prescribed mental health medications.

The rehab facility that I attended was a stickler for court orders and they force-fed me the medication daily. I was able to maintain sobriety when my bipolar disorder stabilized. Funny how that works.

I wanted to stay in complete denial this time too.

However, NA taught me to quickly move into acceptance and the solution. NA also has a saying, “honesty, open-mindedness, and willingness,” and I clung to these ideals as if my sanity depended on it. Well, because it literally did.

The mental hospital couldn’t unveil the entire crypt of what happened when I blacked out, but they did tell me WHY I blacked out. It turns out that I did not relapse. I had a manic episode during which I suffered what’s called disassociation.

The definition of disassociation is: separation of normally related mental processes, resulting in one group functioning independently from the rest, leading in extreme cases to disorders such as multiple personality disorder.

Although I do not have multiple personality disorder, you get the point. Basically, it is a black-out drunk minus the mind-altering chemicals/alcohol.

About a year before going to the mental hospital, I was stable, sober, and doing well in life.

I decided to have weight loss surgery. I was ecstatic when I lost the weight. But six months post-op, I started having some behavior problems.

I told myself that it was my ego and I tried to manage myself through 12 step work and suggestions from my sponsor. I was having a difficult time sleeping, concentrating, working, staying organized, and completing tasks. I would start a lot of projects and never finish them.

As time went by my behavior started getting worse. I realized that my manic episodes were causing all of the chaos. I struggled with serious self-control issues.

And I started using my bipolar disorder as an excuse for poor behavior.

During gastric bypass surgery, they rearrange a few key digestive components. In turn, your body inadequately absorbs nutrients. This process also caused me difficulty with absorbing my medications. I could have been on a non-therapeutic dose of medication for, what I calculate to be, almost a year.

This catapulted me into uncontrolled mania, which resulted in a full-blown disassociation episode.

Although this chain of events was not my fault, failing to get help sooner was. I could have saved myself from the horrifying experience of wondering what happened over those couple of weeks.

I learned that it is never ok to blame your bad behavior on your diagnosis. Having bipolar disorder is not just about medication. It takes hard work, therapy, supportive friends, forgiveness, acceptance, and a mental toolbox.

There is a stigma around mental health disorders and especially mental hospitals. But I am here to tell you that the staff at the mental hospital taught me exactly how to save me from myself.

They taught me how to PEACEFULLY coexist with my diagnosis. They gave me tools for managing my symptoms like snapping a rubber band on my wrist to disrupt racing thoughts, or that rest and sleep are imperative for success with bipolar disorder.

They thoroughly explained to me how my mind works differently.

And what the benefits, disadvantages, and effective workarounds are for my diagnoses. They taught me that it is ok to try and fail, as long as I get back up and try again.

They emphasized to me day after day, that there was nothing wrong with me, that I am perfect just the way I am, and that, not only is it ok to be different, it is imperative to be different.

They gave me the names of famous, successful, intelligent people that shared my disease to prove to me that I can overcome this obstacle in my life.

They taught me how to deal with my anxiety.

By doing things like asking myself, “what is the worst thing that can happen here?” and not worrying about stuff that hasn’t happened yet.

I have survived unthinkable trauma in my life (that’s another story), but ultimately overcoming my mental health obstacles has been my biggest challenge.

But also my greatest reward.

I live a life beyond my wildest dreams today.

I own a home and have a great job managing a medical office. I embrace the things that make me different from others. I laugh often and at myself frequently. I constantly poke fun at my own personality and awkwardness.

I am working on my college degree and all of my kids turned out amazing despite the hell I put them through. Persistence and grit are how I got to be successful. I never gave up on myself. I just kept swimming like Dory in Finding Nemo.

If you’re out there and struggling don’t be afraid to ask for help. There are experts out there capable of helping you. Don’t get in your own way of happiness by not accepting help. Find the people who lift you up in life, ask for opinions, join support groups, and avoid toxicity, Most importantly don’t give up on yourself. Your happiness is in your hands.