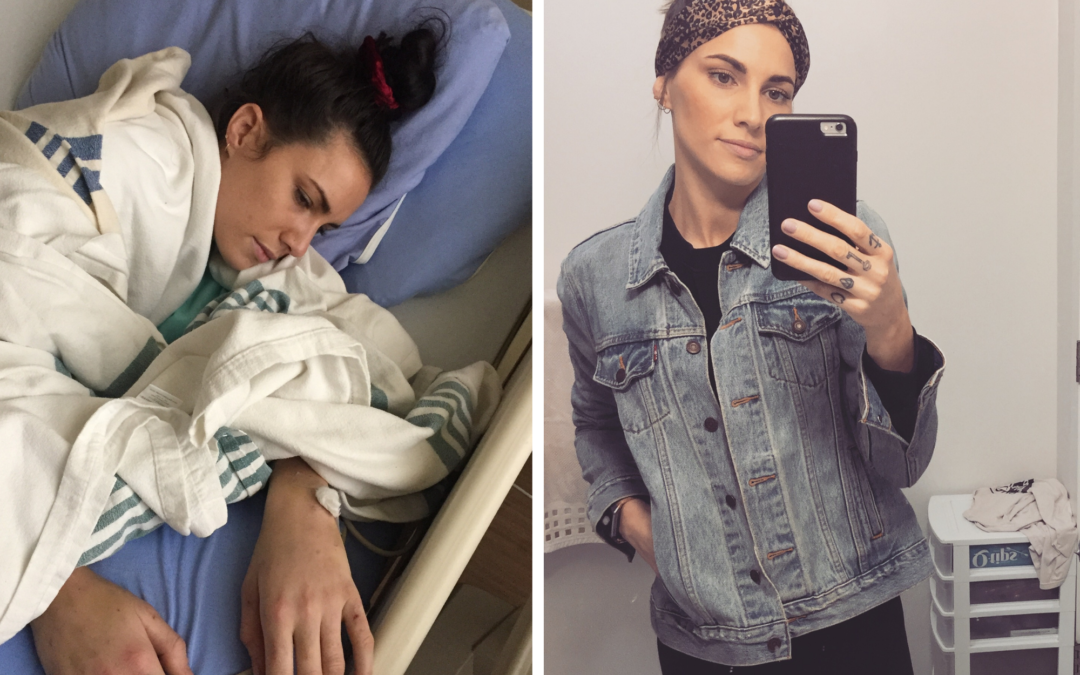 I grew up in a small town in British Columbia, Canada, right on the ocean. Endless fresh air, outdoor activities and so much love from my family. It was truly a perfect childhood. I was oblivious to the evils of this world, protected in our small community.

My depression started at a young age, in grade 7. My best friends turned on me and suddenly I was the kid being bullied and left out of EVERYTHING.

I slipped into a dark world, where I kept everything to myself and started pulling away from my family.

The next year I entered high school and although I was already smoking weed, I started drinking hard. I loved it. I felt happier; drinking brought me out of the darkness. I was more outgoing and I could feel people wanting to be around me.

This continued until I turned 16 and started dating an older guy. I no longer had to find someone to buy me alcohol. It was there whenever I wanted it (he was an alcoholic). It was also my first introduction to drugs.

I was always a kid that went hard.

Like in school sports. If I did it I wanted to be the best and I put a lot of hours into working towards that. So drugs weren’t really any different for me, it was ALL or NOTHING. I started doing cocaine, ketamine, MDMA, acid… anything I could get my hands on and as much as I could do.

At 19 (the legal drinking age in BC) that boyfriend was out of my life but the alcohol was still VERY MUCH in it. I drank till I blacked out every night and woke up doing a line of coke before going to work. It seemed normal to me. Lots of people were doing that around my age so how bad could it be? The difference was those people knew when to shut it down, I never had that off button.

At 20 I had an abortion that completely rocked me mentally.

I slipped into a deep depression and decided to move away from my small town to a city. On day 4 of living in this new city, I met a guy that quickly became my boyfriend. I smoked meth for my first time with him (the night we met) but it wasn’t the high I was looking for.

After spending a couple of days with him I knew he was living between hotels and wasn’t doing so good. I also noticed that he would be nodding out for hours but to me, he looked so peaceful. I wanted to feel peaceful!!! My depression was crippling me.

The drugs I’d been doing for years weren’t cutting it for me anymore.

I asked him what he was using: heroin. I didn’t even think twice about it, I told him to give me some. He told me the warnings, like, if you do it 3 days in a row you’re hooked and the sickness (withdrawals) are the worst feelings you’ll ever go through physically and emotionally. Remember, that I was already feeling that way emotionally so I figured I didn’t have much to lose. He gave me it and told me to smoke it. I did. It was alright.

But the next day I knew I wanted to shoot it. Running from my life and my deep-rooted problems, I wanted to forget about all of them, even if only for a couple of hours. So I did it. I took that needle, put it into my arm, pulled back, and in it went.

And just like that, I felt the heroin’s warm embrace wrap around my body. It whispered to me that it would take care of me, everything was going to be ok, that I didn’t have to live in pain anymore because heroin would take it all away for me. And I fell into a drug bliss.

I stayed in that city for 2 years. After a month of living there, my boyfriend was in jail, and I was left with a heroin addiction at 21 years old.

Heroin took everything from me.

It started with losing my job, and shortly after I entered my first treatment center. I got out and started using within a week! My boyfriend was out of jail again and we found a new place to live. I got a new job. Then he went back to jail, and I lost my job. Then he was out of jail, we got a new place to live (are you feeling the pattern here?!) and so on and so on.

You get stuck in this web of addiction and you don’t know how to get out. It is the single most chaotic way of living: the craziest roller coaster you’ve ever been on.

My family, although not enablers at all, always told me they would never give up hope that I could get clean. They would tell me that when I was truly done living this way they would be here to help me any way they could. I put my family through hell. I put myself through hell.

I eventually ended up on the streets. You’re used, abused (sexually, physically, and mentally over and over again) and I was sick of living this way.

I was arrested at least 4 times in those 2 years in that city.

I remember panhandling one day to get some money so I could go to bed and not wake up sick searching for dope and this lady came up to me and asked me if my mom knew where I was. I looked into her eyes and I felt a piece of my mom there with me.

She was concerned for me. I was so young and considered pretty and she was deeply worried about how bad I would be taken advantage of on the streets. Little did she know I already had been: multiple times. I’ll never forget this lady. She made me feel like she believed in me, believed that I could get out of this lifestyle. And I didn’t know how much I needed that at that moment.

A month later I remember waking up and I just could not do this lifestyle anymore. Diagnosed with Hep C earlier that year I didn’t feel like my life was worth living anymore. Until that morning. I literally packed up my couple of bags and made the long trip back home.

By that point, I’d done treatment, hospital detoxes, and detox on my own multiple times but nothing was as scary as moving back to my town where there was no heroin.

The next day I was in full withdrawal; the worst I’d had to date because heroin was making the change to fentanyl and it was much, much stronger. It was so bad I was looking in my parent’s house for bleach. My plan was to inject myself with it. Although extremely painful, I knew I would die from it. I couldn’t find bleach but I found Clorox with bleach. I used that.

My mom found me on the back deck foaming out of my mouth. She rushed me to the hospital. Once I was stable I was moved into the psych ward. The doctors placed me on methadone and for the next 2 years of my life, I was stable off street drugs!

I even got on a new medication and got rid of my Hep C. What a mountain to climb!!

I thought I was home free.

I ended up meeting my current boyfriend when I was clean. We bonded over our similar pasts. He has struggled with addiction for a long time as well and we were both wanting the same thing in life: Stay clean, live healthily and happy, and eventually have a family.

Sadly, the traumas of each of our pasts resurfaced and as addicts, we knew one thing that would take away our pain: heroin.

The next few years we lived in shame and guilt. We tried so hard to get clean multiple times but we couldn’t go more than a day it seemed like. We are both really close to our families and we hid it from them and everyone else in our lives.

This time I was a functioning addict; keeping my house, my car, and my job.

We tried to get ourselves off of it but we couldn’t quite get a handle on it no matter how bad we wanted to. Slowly the chaos started creeping in.

I started hanging out with bad people that manipulated me, used me, and abused me. I’ve had unimaginable things happen to me in the past couple of years that I hid from my boyfriend.

Christmas 2020 was when I put everything on the table. My boyfriend and I came clean to our families and we were ready for the fight of our lives.

On January 2nd, I went to the emergency room in extremely bad shape.

I wasn’t even aware that both of my hands had an infection and there was a possibility I would lose them.

I have never been scared in my life but that week scared the shit out of me. I truly felt like it was my last chance in life. I’ve OD’d at least 30 times and now my body was literally shutting down. I knew it couldn’t take much more and I’m only 29 years old.

When I got out of the hospital my boyfriend checked himself in. It was our plan and we stuck to it.

I can now say that I am 5 weeks clean! And my boyfriend is a week behind me! We are not in the clear. You’re NEVER in the clear, but we are feeling more optimistic than ever about our future.

We are putting EFFORT into our recovery.

The days are long and so so so f*cking hard but we know that each day that passes is another one farther from the wrath of our addiction. It’s truly something to celebrate!

So, after a 10 year IV addiction, my scars on my arms tell my story of my 20’s. A story that I will never forget and hopefully one I’ll never have to go through again.

If I could go back and show my 21-year-old self what that needle of heroin would do to the next 10 years of my life… I would take it and throw it away and hold myself and tell her that it’ll be ok, that heroin would only make it worse.

People would tell me I was a lost cause, that people like me can never get clean (especially as a couple). Well, I’m here to prove those people wrong.

***Disclaimer: This website, jugglingthejenkins.com, is not affiliated with any specific recovery program. Different avenues work for different people.***