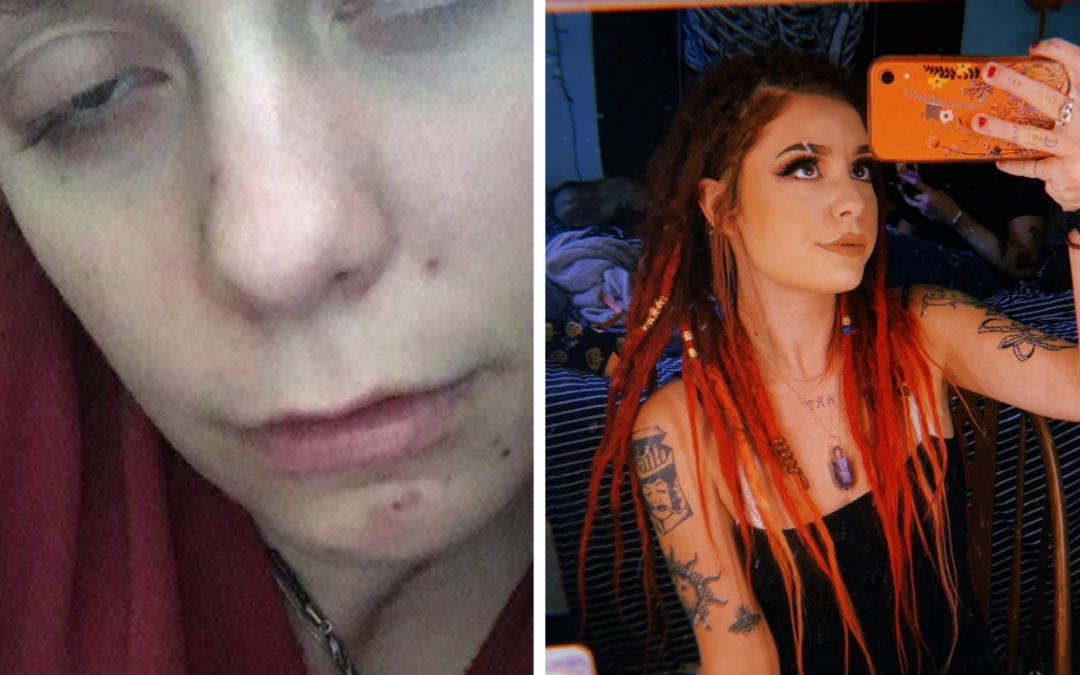 My story did not begin in an unusual way for a teenager. It started with weekend sleepovers with a group of friends during which we would creep out the back door once parents had gone to sleep; sneaking sips of wine and hits from a joint through quiet laughter.

I thought I was having the same experience as everyone else.

It wasn’t until years later that I was able to see it clearly. They were enjoying an occasional bout of extra fun & rebellion: I was finding solace, my own nirvana. And as time passed, my desires increased. At first, this occurred unnoticeably, quietly, the way paint blends together on a smeared pallet.

I slowly shifted from the friend group I’d had growing up into another.

Parents, teachers, and peers never batted an eye, we were simply seen as “hippies” or “free-spirited” to ourselves and others. With these people, I felt content, as though I was my most authentic, adventurous self.

When I was 15, amidst the foggy haze of partying, I became pregnant. The situation wasn’t completely consensual, the age gap wasn’t legal, and for many years I remained in denial in regards to exactly how profoundly this affected me. I did not have the baby. In the months that followed, my behavior became completely unfamiliar to me and the speed of progression became quicker than ever before.

I drank on a daily basis after school and I tried any drug that was offered to me, including crack/cocaine and a variety of pills.

This remained mostly socially acceptable within the group of friends I had, allowing me to tell myself it was just a wild, teen phase.

During my junior year, I started dating a heroin addict. I was completely oblivious as to what the next 5 years of my life would become. All I could see was that I cared for him, he was in trouble, and I naively believed that simply supporting him would help him to break free.

I was unable to see that I was an addict myself. I didn’t have a needle in my arm, I did my drugs at parties with friends, and I went to school every day.

How was I an addict?

It was during the summer following my junior year that everything unfolded. My family and even my friends were awestruck by my behavior. After a season of desperate attempts to separate me from the situation, the people in my life were helpless.

When fall rolled around, my parents set the boundary: either seek treatment or leave home. I remained wrapped in denial as I moved my belongings to my then boyfriend’s trailer.

I attended only the first month of my senior year. My withdrawals would begin by the 4th hour, leaving me drenched in sweat, twisting and curving my body around the chair.

I told myself, “I’ll just miss today so that I can go with him to get our dope & not be sick.”

But I never went back.

I should’ve been there, standing beside them, the friends & classmates I’d grown up with. I should have been shouting goodbye to our high school years.

Instead, I watched from my phone within the messiness of a syringe-filled room, just me & the flies on the ceiling.

Neither of us had jobs or a car. We lived 20 minutes away from Detroit, where we bought our dope. We spent every day finding a ride to go to stores, steal things, return the things or pawn them, and use the money to get dope.

The house was a wreck: it was nearly entirely void of food, always full of teenagers & adults using heroin. Eventually, there were so many 911 overdose calls, we were considered a liability to the trailer park & asked to leave.

At some point during this, at 17 years old, a surprise intervention came from my family. Their tears filled me with the most immense sense of self-loathing and guilt I’d ever experienced, convincing me to agree to my first rehab.

Over the next 4 years, I would go to 11 rehabs, 6 sober living houses, and 1 homeless shelter.

I would move cities, I would move states, and I would even briefly move out of the country to stay with my dad in China. I would be hospitalized for several overdoses and a combination of hepatitis & liver failure.

From the start, around month 3 of my heroin use, I remember thinking, “This is the most desperate, pathetic way a person can live.” And yet it seemed inconceivable to exist any other way.

Each time I tried I felt uncomfortable in my own skin. The restlessness and depression were all-consuming, physically and mentally. They followed me everywhere.

Eventually, I began to notice a pattern: when I drank, it was always heavily, and without a doubt ended in a spiral of drug use leading back to heroin.

It seemed impossible to accept the fact that as a young adult I’d have to remain completely abstinent from all substances.

How could I have a social or dating life? How was I supposed to let go of the friends I’d had for years knowing that 2 of them had already died? But most of all, how was I supposed to be a functioning member of society without having learned a single skill to do so?

At 21, my mother asked me to go to rehab for the 12th time. I had been couch hopping every day, unsure of how I would find a bed to sleep in or food to eat. I told her that I didn’t believe in myself & she needed to let go. She said, “Just 2 weeks so I can sleep at night.”

Something clicked. I don’t know why or how but it did. And I asked myself, “What if I just tried everything they ever told me and gave it my best shot?” So I did.

I walked away from who I used to be.

I let go of all my friends. I exercised, journaled, read, and meditated every day. I joined a program to complete my diploma. I started working as a waitress. I found a small but loving group of friends who don’t live a lifestyle of partying in any capacity. I joined a yoga class. And I attended weekly therapy.

I am almost 22, and I have 7 months clean. At some point, the cliche happened, “the obsession was removed.” Heroin no longer haunts every moment in my mind.

There are days it feels less doable than others, but I feel it. I feel sad, I feel uncomfortable, I feel out of place and restless and that’s okay. That’s the biggest thing I’ve learned in recovery; you have to allow yourself to feel the pain. It’s temporary. And it’s the pain that helps you grow.