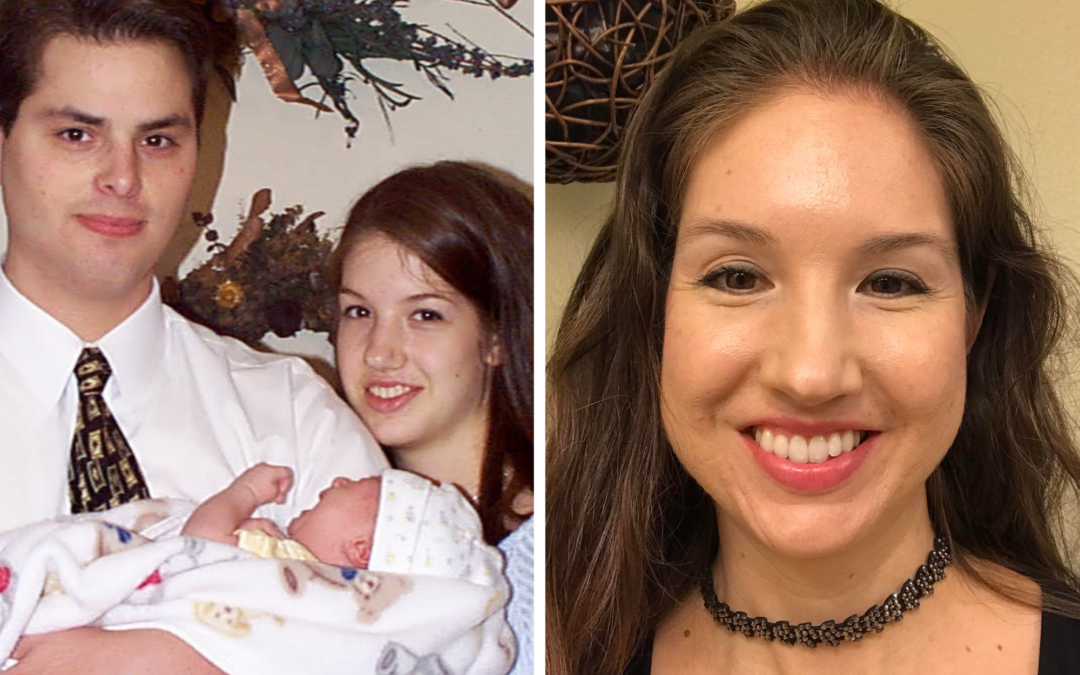 School was easy for me growing up. Until it wasn’t. When I was a junior in high school, I didn’t know what was wrong: all I knew was it was hard to go, I didn’t like it, and I couldn’t focus. Everyone was talking about which college they would get into. I was just trying to make it through the day.

By the time high school ended in 1999, I had barely scraped by enough to graduate.

I had made it through by ditching school often to hang out with my friends. Otherwise, between school, work, and being grounded for having a “surly attitude,” I never would have seen them. And with little emotional support from family, I desperately needed my friends’ support!

Soon after I graduated I met Bobby, the love of my life. Everything was going great. Life was easy again. How was I ever struggling before?

I had started some college classes and was waiting tables. Bobby had started a career in computer programming. He and I connected on so many levels. One of those levels was he was a member of my church. A church that taught to marry and start a family young.

So that’s what we did.

We got married and moved away from our families and friends six months after I graduated high school.

A few months later, during Spring Break of 2000, I found out I was pregnant. All hell broke loose. It started with morning sickness and nausea so bad I had to quit school and my job. I couldn’t even drive anywhere. My husband Bobby would leave me lying on the couch when he left for work. When he got home, I’d be in the same place he’d left me.

Obviously, this wasn’t just morning sickness anymore, but I didn’t know what else to call it. I was so lonely, I’d leave the tv on all day. We didn’t have cable, just a crappy antenna, so we only got a couple of fuzzy stations, but it was better than silence.

All my friends were working or in school. I wasn’t close with my parents and my siblings all had their own lives. My biggest fear was that I was a burden on people, so I never asked for, or accepted, any help from anyone. I was crumbling, fast. I didn’t recognize my own face in the mirror. I would have to sit down during my shower because I was too weak to stand.

I knew I wasn’t happy, but I had no idea why.

I had only ever wanted to be a mother; and here I was, pregnant with my wonderful husband’s baby, and I was anything but happy! I thought I was going crazy.

I was scared to go to the doctor. I didn’t know what to say was wrong and I was afraid they’d tell me I wasn’t fit to be a mother. I felt so alone in my struggle. And although the internet did exist back then, it didn’t have all the helpful resources that it has now.

I didn’t know what to do, but I had a baby growing inside me, so I couldn’t turn to drugs and alcohol, no matter how tempting they were. Besides, my religion wouldn’t allow it. Instead, I prayed to pass out so I could be unconscious for just a few minutes. So I wouldn’t feel the intense emotional pain I was dealing with. I never got that wish.

Somehow I made it through the pregnancy, and my sweet daughter was born three days after our first wedding anniversary.

Even though we lived away from family and friends, I was no longer alone! I loved being a mom, and I was feeling a bit better, though the pregnancy had taken a toll on my body.

I was 20 lbs. underweight, and at the time, there was a huge push to breastfeed instead of formula feed. So despite feeling like all the happiness was being sucked from my body (I didn’t know what dysphoric milk ejection was), and not being able to gain any weight, I continued to breastfeed.

Years passed, and I had upswings: rare times when I felt okay, or really high times when my mind would race, I couldn’t sleep, and I would run around like a laser-focused tornado, sometimes causing destruction, sometimes just finally getting things done; and downswings. But mostly downswings.

I was too distracted by the depression to follow a conversation, and I was scared I’d be judged as being weird. Mommy/toddler playdates were out of the question, even though I felt guilty because Kate was a social kid. My house was always a mess and I was rail thin.

I didn’t seek help until one day in about 2003. It was in the afternoon but I was still in bed. I couldn’t shake the image of myself in a room full of blood with blood dripping from my eyes. I didn’t know what it meant, but it terrified me! Bobby called a nurse and she finally put a name to one of the things I was experiencing. Depression. She said I was extremely depressed, and I needed help.

My general practitioner referred me to a psychologist who thought I only needed to attend a class on how to handle stress.

It was a class I thought should be required for everyone, but it definitely didn’t “cure” me. Next, he sent me to a cognitive behavioral therapy class for depression. It, too, was helpful, however I still didn’t think it covered all of my issues.

I started reading everything I could online (from trustworthy sources) about mental illnesses, so I could finally figure out what the heck was going on! When I read about bipolar disorder, something just clicked in me, and I knew that was it. I wrote four pages of reasons why I thought I was bipolar, sharing many instances in my life that I felt illustrated it.

My psychologist still wasn’t convinced. However, he went out of the room so he could make photocopies of the papers. While he was photocopying, he happened to bump into the head of the bipolar department.

The head of the bipolar department looked at the pages and verified that I indeed had bipolar disorder.

I was switched over to his care, and finally, we started getting somewhere!

At around the same time I started seeing the psychologist, I also started seeing a psychotherapist. She told me she couldn’t begin to help me until I was on medication. In my case, she was absolutely right! (I later found out that bipolar disorder gets worse if not treated with medication.)

I was hesitant to try medication at first, but after what the therapist said, I decided to try it. The head of the bipolar department was also a psychiatrist. We started the process of finding the right medication combination for me.

Once I started getting some help from the medication (which took some time), half of the things in my life that I thought were problems just weren’t that big a deal.

Through psychotherapy, we also discovered that I had PTSD from a childhood experience that I had no recollection of for a good portion of my life. It was wreaking havoc in my relationship with Bobby. One of the things that helped the most was when the therapist validated how tough things had been in my life: something I had never allowed myself to do.

She viewed me with compassion, and for the first time, I did too.

Even after all the knowledge I gained and help I received, I still struggled quite a bit. I did anything I thought could help.

I did a 12 step program. I studied religious texts earnestly. I went to holistic chiropractors and tried color therapy, heavy metal detox, and all sorts of things.

Those all helped a little. But I found two things that made all the difference for me:

1) I started reaching out for help. I talk with someone on my support team almost every day. Certainly, days when I’m struggling. My sister and I have saved each other’s lives more than once just by being there and listening. Knowing people who understand, don’t judge, and offer help is so imperative.

2) I read a self-help book that made me realize I have the power to create and change my life. The book taught me that my thoughts create my reality. It led me to meditation, tapping, energy healing, and a whole slew of other empowering self-help books. Meditation has helped alleviate my anxiety more than any other thing I’ve tried. Tapping also helps. Energy healing and learning about balancing chakras has been life-changing!

I’ve also learned it is safe to feel ALL our emotions.

As kids, we’re unconsciously taught that it isn’t okay. That there are “good” and “bad” emotions. That if we start crying, we’ll never stop. But, it isn’t true. Only stifled emotions are dangerous.

Stuffing our feelings actually creates disease in our bodies. It also prevents us from feeling happy emotions. When we allow ourselves to feel every emotion, even difficult ones, our bodies actually process them more quickly than we’d think.

Since my mood is so volatile, I have also learned to help regulate it by surrounding myself with positive, uplifting vibes. From the people I surround myself with to the music/movies/media I allow in. I also regulate my activity level: neither pushing myself too hard or resting for too long. Yes, it takes effort and discipline, but it is way better than being depressed or manic.

All these things: therapy, medication, support from friends, meditation, tapping, owning my own power, self-regulating, have got me to where I am today.

I have healed the PTSD, I have not had a manic episode in about 15 years, and I continue to reach out to my support group as soon as I have depression or bad anxiety.

My experiences have taught me understanding, what is important (and what is not), to appreciate the good times when they come, and above all, compassion for everyone.