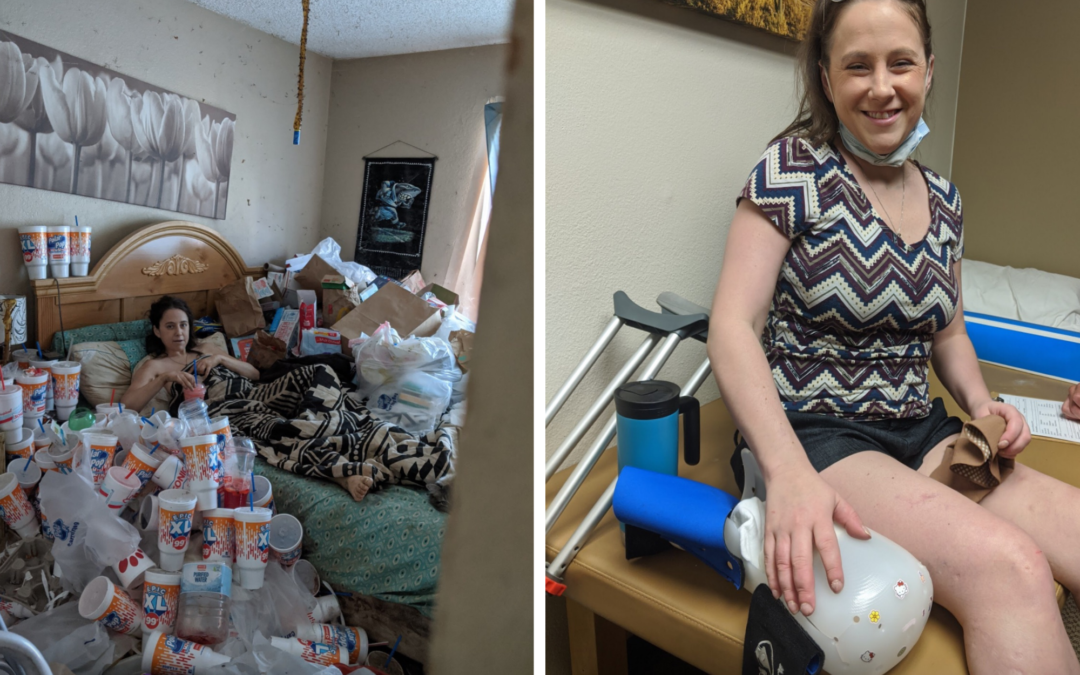 It starts out as the same old story, right? I started experimenting with pills while in nursing school. I was 21, my then-boyfriend (now husband) & I had just bought a house. We got a roommate from our work to help us pay the mortgage.

I was always a go-getter.

I moved from the Midwest to Phoenix and attended ASU all by myself. I was super independent and nothing was stopping me or my goals. I remember when I wanted to change my major to nursing & the academic advisor said, “Are you sure? Nursing school is really hard. It’s harder than pre-med you know.” That just pushed me even more.

While in nursing school the money ran low. I remember my boyfriend coming to me & saying, “We don’t have enough for any blues but we can get a g of black??”

“Fine,” I answered, “but just this once, never again.”

The next thing I knew I was shooting up, my boyfriend left me & I let the house foreclose because of my addiction.

It wasn’t long until I was kicked out of nursing school for cheating, in my very last rotation of critical care. Feeling defeated & in total denial, I was removed from my foreclosed home and moved into a dingy 2-bedroom apartment that I shared with a 40-year-old strange man. I sunk deeper into depression & drugs.

My boyfriend came back shortly after that. His father had just died & these were the only 2 ways he knew how to cope: me & heroin. We continued to use while I still worked full time to support both our habits & pay the bills.

Years went by and my boss asked me if I wanted to be promoted to having & managing my very own store. See, he knew the “Old Becca.” The Becca who was loyal. A move maker, a no-bullshit taker, would call anyone out for being wrong. He had no idea. I took the promotion. I had to. But I knew I didn’t have it in me.

To manage this stress & just plain old get better after work (I never used at work) I needed to get a shot fast, so I started going into my left lower leg. By this point I wasn’t even hitting veins, I had created a massive open wound and was just shooting right into it.

I did NOT hide it well at work. The wound would collect puss throughout the day & smell so bad that I had to wrap it in dozens of “surgical pads” and wrap my leg in plastic wrap over & over & over again. The puss would seep through my socks & shoes and drip onto the floor. I couldn’t sit or stand in 1 place for too long because I would leave a puddle of puss where I was. My boss commented to me about someone saying I had an “odor” & others said it to me as well. It was so devastating.

My boyfriend had moved out of the bedroom because of the smell & the puss that would soil the bed every night. The feeling of always thinking someone can smell your rotting leg & have to worry about it dripping still wasn’t enough, I still kept using.

I worked until I couldn’t walk anymore.

I had been shooting up into my leg for years now & pieces of bone would fall off sometimes. I could no longer walk or even stand on my left foot. For three months I sat in my bedroom and lived off money from my dad & unemployment. I NEVER left my bedroom. I peed in cups & pooped in bags because I just didn’t have the energy to even walk 4 steps to the bathroom.

When the money ran out I had no other choice. My boyfriend, who was still using but begging me to get help, took me to the hospital. I was so scared & beyond ashamed of what I’d done to myself.

When I entered the emergency room I was so anemic, dehydrated, and depleted of vitamins that the doctors couldn’t understand how I was even still alive.

Just a few hours after being admitted the on-call orthopedic surgeon burst into my room and said, “We’ve gotta amputate. There’s no other option.”

He replied condescendingly, “Well what did you expect? You shot up into your bone for two years.”

That night the nurse gave me a 30mg Percocet for pain.

I was jonesing so badly I took it into the bathroom with one of the metal spoons from dinner & a needle left in my purse.

Crushing the pill frantically & mixing it with water I drew it up into one of the saline flushes I found in the trash. Filler & all, I didn’t care, it went right into my central line.

The whole next day is a blur. I transferred rooms, my phone & belongings were gone, & I could no longer read or write. I remember trying to call my fiance on the hospital phone but I couldn’t get my fingers to push the buttons.

The next memory I have is of me at home with a needle in my hand. Apparently, I had left ama & the hospital provided transportation home. I have no memory of this.

I begged my fiancé, “Just one more, please.”

I was unable to mix up a shot myself because my fine motor skills were gone. Sitting in our trash covered, bug & rat-infested apartment I sat slumped over in a chair attempting “just one more hit.” It never happened. I was unable to give myself any sort of shot anywhere. I tried to do the shot rectally & it spilled out all over the floor.

My fiancé refused to help me anymore. He said, “Babe just go to the hospital, they’ve got what you need there, you can get high there.” The next thing I remember was being picked up by EMT’s and riding in an ambulance.

The next day I met the man who would save my life: Dr. S.

At the time I had no idea who this man was, or how he was about to save me. He sat with me that evening for over 2 hours, talking to me about everything. From the amputation to other options, drugs, family, nursing school, work, and my fiancé.

From then on he visited me every single day. This all happened during the height of COVID which meant no visitors, NO EXCEPTIONS. Dr. S talked to my mother & father multiple times a week & my fiancé & his mother daily about my progress. We had to get my neurological condition to improve before I could have the amputation. It was a slow process, but after a few weeks, my brain swelling had decreased enough for me to have surgery.

After the surgery, I was in the hospital for another 3 weeks.

Still, every single day Dr. S visited me. He made sure I went to THE BEST inpatient rehab in the valley where I spent a month in intense physical rehabilitation. I spoke to my mother and father every single day.

On Friday, July 24th my mom called me multiple times. She had her own substance abuse issues with Xanax & alcohol.

I had received a text from my brother & dad saying, “Ignore mom, she’s drunk.” So I did! “One day won’t hurt,” I thought. “She’ll call tomorrow at 6 am like she does every single day.”

Saturday came and still no call from mom. At around 3 pm I got a text from my dad, “Hey Becca, call me it’s very importan.t” I called him right away. He said to me softly, “Becca, it’s your mom, she’s passed.”

I started howling “Nooooo Nooooo I didn’t talk to her yesterday! She called me 5 times left 3 voicemails & I never picked up!!!”

The next month was probably the most difficult of my life.

I finally realized where I was, what I had done, & how much pain I was in. I was also left homeless by the rehab facility & had to return home to my drug & bug-infested apartment.

My fiancé worked his damndest to get our apartment into living condition. It wasn’t perfect, but when I returned the drugs were gone, the floors were clean, & we had a new clean bed to sleep in together. Getting into that bed not having to climb over trash and needles, sleeping with the love of my life next to me instead of a pile of rotten food with maggots; that feeling right there, was better than any feeling any drug has given me.

Since then I’ve gotten two prosthetics. One for walking & my second for jogging & running! I’m working on my overall health so I can possibly retrieve my fertility and have a family.

I take every single day as a gift & am so thankful to be alive.

I still see Dr. S every 4 weeks. He checks in on me even though he no longer gets paid to see me. We both always cry when we see each other. He refers to me as his “poster child for recovery and prosthetics.” I thank him every day for saving my life and he always replies, “I just cut some bone, you saved your own life. & you’ll continue to every single day.”

And that is the biggest moral of this story. YOU SAVE YOUR OWN LIFE. Yes, you will have help along the way, but you do it! You follow through, you chose to stay sober every single day, no matter how hard it gets, the choice is yours. You control your own destiny, & if I can do it, you can too!