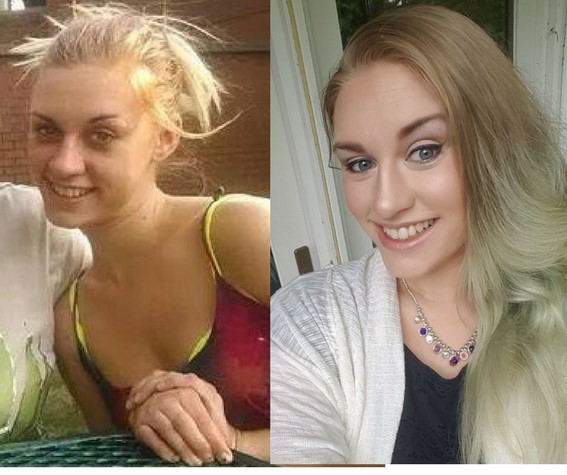 I would say I had it pretty good growing up since I was never abused or molested, but growing up with an alcoholic/addict stepfather made for a pretty tumultuous home life at times.

Because of the fact my stepdad used heroin and it tore apart our family, I swore I would never touch that drug, no matter what.

I never really felt like I fit in until I took that first drink.

Before that, I always felt different and out of place. For the first time in my thirteen years of existence—I felt confident, and I wasn’t worrying about what other people were thinking.

My use began escalating and I started to care more about partying and less about school. During my high school years I skipped a lot, preferring smoking pot to going to class. I would try anything I could get my hands on.

By my senior year I loved going to raves, taking psychedelic drugs and dancing all night long. A while after my first boyfriend and I broke up I decided to try heroin, because I wanted to see what all the hype was about.

I snorted a tiny amount because I was too smart to overdose, and I found myself feeling disappointed. It made me a little high, but mostly I felt nauseous. After my first experience, I was sure I would never touch the stuff again.

Three months later – the summer before my senior year – I woke up one day and decided I didn’t care about anything anymore… so I began injecting the drugs. There was a group of people that I would get high with and all of them were hooked. I would witness them doubling over in pain from stomach cramps and vomiting.

That would NEVER be me. I was smart remember?

I continued using small amounts here and there, but I wasn’t using everyday. This didn’t stop me from stealing to support my habit though… and I graduated high school while out on bond.

I got caught using stolen credit cards so I was given the option of drug court diversion, and if I completed the intense, fifteen month program, I would have a clean record. After several sanctions for dirty and missed drops, and eventually a DUI, I was kicked out of the program and sentenced to seven months in jail with 173 days served, and a felony on my record. I was 18 years old.

I heard all sorts of interesting and exciting stories about drugs while I was locked up. Before I even got out of jail, I was on a mission to try meth.

The day I got out of jail I injected cocaine for the first time, it took me to another world. It was terrifying… and I loved it.

I ended up meeting a guy and tried meth with him.  Within a week we were dating and moved in together.  He wasn’t cool with me using heroin or needles, but he would smoke meth with me all day long. I could live with that… as long as I didn’t have to be sober.

Three years after the first time I tried heroin I couldn’t sleep one night. I was tossing and turning, my skin was crawling and I was sweating and freezing at the same time. “Great,” I thought, “I’m getting the flu”. After my painfully sleepless night, I turned to google and my greatest fear was realized—I was in full-blown withdrawal.

When I was 21 I moved out to a bigger city to pursue my new career as a stripper.

At the time I was on Suboxone maintenance trying to stay clean, but that went out the window when I found I could make $300 on a slow night. The more money I made, the more I used and the more I used, the more I needed to use just to feel normal.

I went to work, I got my drugs, I came home, I used and I slept. Day after day, this was my new reality. I started to hate my life…and hate myself.

I knew it was time to get help. I moved to Grand Rapids and went to a detox facility and I left there for a “halfway house”, thinking I would start fresh where I don’t know anyone.

It was a matter of days before I was using again. I knew where I could make money quickly and wouldn’t have to wait for a paycheck. Back to the strip club I went. I would have several offers from many men to go home with them. As tempting as they were I told myself I made enough money dancing so why take it to the next level?

A week after I bought some really good coke from a man I met in the club, I went home with him as he promised more good drugs. He assaulted me, raped me, and then stole all of my money.

I went right to the police to press charges, and after several agonizing weeks was told that the prosecutor would not pick up the case because I was not forthcoming about the fact that I was an addict when I gave my statement just hours after the incident. Therefore this would be “a red flag in case he does it again.”

I was in disbelief. I had never really believed in or cared for the system, but this brought on a whole new hatred. What I took from the situation was that clearly police officers didn’t care about addicts, and in their eyes it’s okay to rape and batter women as long as they are drug addicts… bonus points if they work in the sex industry.
After this I lost all hope. I was sure that I would die an addict and that there was nothing better for me in life. I no longer wanted to return to the club, but I needed money to support my habit. I met a woman who introduced me to “Backpage” (an escorting service) and less than a week after my assault, I was having sex in exchange for money.

As long as I stayed high out of my mind—I was able to do this. Over the next couple years I lived hotel to hotel. I bounced back and forth to different cities and different disgusting men’s homes (as long as they would pay for my habit).

I was so numb at this point and so out of touch with reality. The only “worth” I had was the dollar sign in front of the amount of money men were willing to pay me for sexual acts.

I hardly talked to my family, not wanting anyone to see me like I was and also if I came around them I couldn’t be as high as I would have liked to be. I tried to end my life more than once and wound up in a psych ward three times in three different states.
Some months later I moved in with a man I had seen several times and was quite attracted to beyond just sexually. I was faithful to him, and hoped this would be the beginning of me finally settling down. I continued to use heroin while living with him but I was off the streets, and other than marijuana I didn’t use any other drugs.

I had always been sure that I was unable to get pregnant due to all the drugs that I had used, but I was wrong. Less than a month later I found out I was pregnant. Half of me was overjoyed, the other half was devastated and terrified.

I smoked crack on my way to confirm the pregnancy with a doctor, and two days after finding out it was in fact positive… I checked myself into rehab.

I completed treatment and fought with the father the day I came home so went to stay with my mother. I relapsed within a few days of being out. I was so sure that just being pregnant would keep me clean. I didn’t realize I needed to change EVERYTHING. I didn’t use every day, but several times a week and every time I felt so guilty. The day I was 16 weeks I found out I was having a boy and I knew I was ready to do this right.  I went to a program on the other side of the state for pregnant women and women with their children.

I was one of the few not sent there by CPS. While in that program I learned to rewire my brain, I took notes, I read books on addiction, I forced myself to think positively and push thoughts of use out my mind, and I felt my baby kick.

After I came home I attended at least one meeting a day. I gave birth to an incredible healthy baby boy and today I get along with his dad, although we are not together. My 7 month old just started crawling and got his first tooth! He will never have to see his mommy on drugs. I have legitimate employment for the first time in four years, and not only do I have a car, but it’s legal, and I have a driver’s license for the first time since I got my DUI.

I thank God for my life every single day. I completed Peer Recovery Coach Training and I am involved in Voice.Change.Hope which is a local meeting in my area whose goal is to reduce the stigma surrounded by addiction. I will soon start my next journey furthering my education so I can get a degree in social work. I want a job where I can work with addicts,  and I know I will achieve my goals, one day at a time!

Do you have an inspiring story of recovery? Check out our submission guidelines and send us your story!

Check out my book about my own journey through addiction here: High Achiever: The Shocking True Story of One Addict’s Double Life.