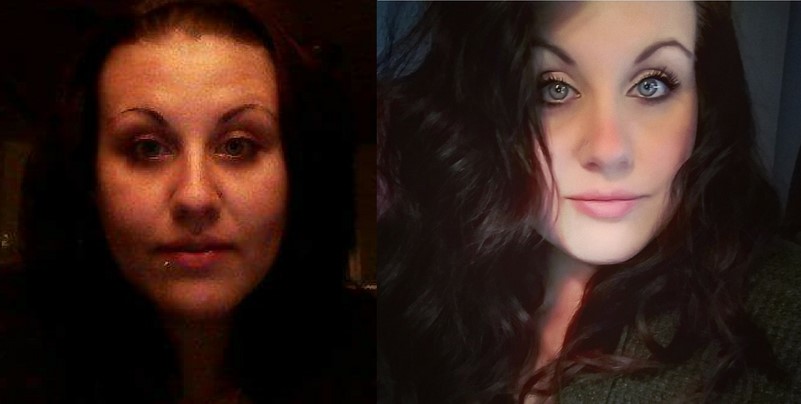 “You know I hate when you just stand there and stare at me,” my husband said from the couch, barely looking up from his video game.

“Yeah, but I married you, which means that I get to stare at you whenever I want,”  I replied as a mildly defeated, sort of smug smile formed on his face.

I had a habit of staring at him at random times, without actually saying a word to him. He hated it. I think he thought a stare from a woman meant a fight was about to ensue, but this just wasn’t one of those things. I stared at him like a child stares at the gates of Disneyland the first time they see them. Pure amazement. Because having someone marry me, especially someone who was a good person, happened to be the high school love of my life, and cared about my children and I equally—was not something that was always realistic for me.

In fact, being a woman with anything to offer another human being was a recently new development. Because five years ago, I was useless, helpless, and dying. Because five years ago, I was an active addict.
I’d like to say that it was my grandmother’s death, my mother’s battle with cancer, my emotionally troubled childhood, or my failing out of my first semester of college that propelled my journey into darkness, but the truth is that the signs were there since childhood. I was always a little chubby,  because I loved food and found comfort in it.

Next was love. I loved love, and felt pain when I was alone.

Next was t.v.  I would find myself obsessing about the news, or crime documentaries, or the end of the world, to the point where my family thought I was crazy.

As I made my way through high school, I found other obsessions; partying, shopping, and driving too fast down empty back roads in an attempt to fill the growing void in me. I followed these vices, especially the partying, through my late teens, eventually finding pills.

It was a summer day, I woke up late in the afternoon, something that was happening more and more often lately.  I remembered that someone had given me a pill the night before. “It’s a Perc 15,” they had told me.

Just like any other day, I took a shower, had coffee, and on this day, I took this Percocet, like it was Tylenol… like it was no big deal, like it didn’t hold the power to change the course of my entire life.

Instantly – it felt like a flash of lighting, or a scene change in a movie.

I soon found myself waking up in the morning and thinking about pills before anything else. I would look at my phone to figure out where I could get them, debate on whether or not I’d have time before work or if I had enough money to get some.

It happened so quickly.

My family members had struggled with alcoholism before, but this was something I didn’t recognize. I remember telling myself, “This has to be the last time. This has to be it,” about a million times. I wasn’t this person. I was from a small town, a town where you could get grains for your chickens, breakfast, and stop at the pharmacy, and still be within the same mile. Only people raised in cities were like this. This didn’t happen here. What I didn’t realize at the time was that I got caught in a time where pills had just started their true surge into our small town.

My downward spiral from that ordinary day when I took my first pill happened quickly. For as many times as I thought I had control, or that everything was fine, there were twice as many times that I couldn’t get out of bed, thought I would die from this sickness, and thought that I would be alone when they did eventually take me.

In a two year span—I stole, destroyed relationships with people I loved, ruined trust, ruined essential facets of my life, sold possessions, and lost everything else.

The amount of pills I needed to function multiplied, day after day, until I hit a wall, and nothing helped the sick feeling that came with the morning sun. I made bad choice after bad choice. I found myself in a hole that took two years to make—but that five years later, I’m still seeing the affects of.

Then came that cold morning in November, when everything changed.

My first, and only love came back into my life through a simple text message. He came to my apartment to pick my daughter and I up and take us out. After strapping her car seat into his car, he buckled her in, shut her door, and looked up at me with a concerned look on his face, “You look exhausted.”

I was so tired… I was so worn out. I spent so much time getting ready for him to see me – and he saw right through it.  He saw the pain, and the exhaustion, the life that I had tried build out of nothing. He also saw past that, to the person he knew years before. It was that day—in the driveway of my old apartment—that I decided enough was enough.

Within a few months, he and my father moved me out of that apartment and over the next year, two of the greatest men I’ve ever known stood by me while I slowly put the basic pieces of my life together.

Being a veteran of the Army, my fiance was tough, and he taught me how to toughen up. He called me out on every excuse that I made, and helped me rewire the part of my brain that I thought I would never change—my impulse to live by lying.

I would love to say that was all it took, a miracle meeting of two hearts to change my path, and that this was how it ended, but it wouldn’t be that easy, and there was much more work left to do.

I started on a maintenance program, and through the next year, learned how to be accountable again. I found local Narcotics Anonymous meetings, and slowly worked the steps on my own. I never really found a sponsor, but instead I found a job that I loved working with my future husband. My boss happened to be an amazing and understanding man, who saw my potential, expected a lot from me, and yelled at me when I needed it like I was his daughter.
I made amends to people around me, but instead of using words to do this, I let my actions speak for me. I woke up in the morning and got my daughter to school on time; I made plans with people, and I kept those plans.

I went to meetings, I kept my house clean, and I learned how to be an adult. It took a while, but eventually people saw the change in me and I had an overwhelming sense of responsibility to never disappoint them again.

Around the same time I was going through my journey, my brother was on a parallel path. Together, we fought separate but equal battles to make it to the other side alive and well…by the grace of a power greater than ourselves, and the support of our loving family, both of us made it.

It’s been three years since I first felt the feeling of a healthy, mind, body, and spirit again.

In these three years, I’ve had a second beautiful daughter, and married the only love my life ever knew. We got married on top of a mountain, with our two daughters by our side, surrounded by everyone we love and on that day, it was pouring rain.  We took that as a sign of good luck.

Each and every morning when I wake up, I think about how lucky I am. My life could have been so different. Sometimes, my husband still struggles with my past, with a battle he thinks I shouldn’t have had to fight, but I’ve learned to live without regretting mistakes, despite the struggles that we still face because of them. If it wasn’t for that battle, I wouldn’t be here today. I wouldn’t have the strength and understanding I need to get through the day and I wouldn’t have the compassion or direction I need to pursue my dream of being an addiction counselor.

Without that battle, I wouldn’t have the gratitude to know that every day holds a gift. And that gratitude—the idea of being grateful, always in all ways—makes every moment worth it, and gives me joy that comes each and every day with the morning sun…