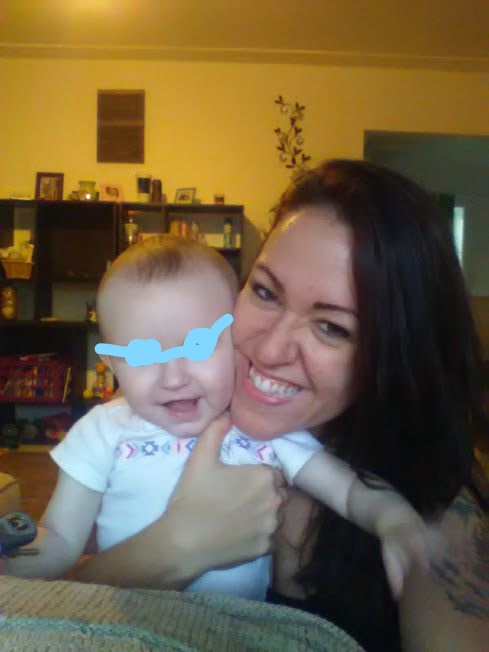 Don’t you just hate that feeling of dreading going to sleep, because you know the next day, you have to wake up and take care of your children? You know your newborn is gonna be there when you get up, looking at you and crying, and want to be fed and have her diaper changed, your toddler is going to want breakfast and to change out of his pajamas, and all you want to do is leave them alone in their cribs and run out of the house and never come back.  That feeling of resenting them because they are so needy and all they do is take, take, take giving you nothing in return. Ugh, that’s such a drag, isn’t it? …..

Wait, why do you look so confused?  ….. You are probably sitting there wondering what kind of monster could possibly say those things about their own children. Well, I’d like to introduce myself, I am Tiffany, and that monster was me.

My first pregnancy was glorious.  When my little man came earth side, everything was right in the world. I would hear his little cry in the middle of the night and fly out of bed, eager to comfort this sweet, innocent, wonderful little being that I had created. We would wake up in the morning and I would spend literally hours, just studying his beautiful little face. I would snap 8,000 pictures of him in the same pose, then when he would nap, I would smile as I looked through all of the pictures I had just taken an hour before. My love for him was overwhelming, and I would have done anything within my power to make sure that baby was cared for.

I got pregnant again when Kaiden was 6 months old. I had wanted to have another baby. We planned it so that Kaiden could have a sibling close in age. I knew I wanted another child, and I didn’t want to have to start all over later on in life, so we decided to just pop another one out right away.

I knew this new baby was going to give me a run for my money when I found out I had Gestational Diabetes.  During pregnancy, the placenta makes hormones that can lead to a buildup of sugar in your blood. Usually, your pancreas can make enough insulin to handle that. If not, your blood sugar levels will rise and can cause Gestational Diabetes. Long story short, I had to spend the remaining duration of my pregnancy eating cheese and crackers and pricking my fingers to check my blood 4x a day. All I wanted was a lot of ice cream and I couldn’t have it. This baby hadn’t even been born yet and I already had a small, unjustified resentment against her.

My delivery was a breeze, Chloe was out in under 4 minutes. All of the resentment I had felt prior had been erased the moment I laid eyes on her.  She immediately made me realize all of the sacrifices I had made during pregnancy were worth it.  She arrived healthy and happy and life was good.

Until we brought her home… She cried all night that first night. Literally…The. Entire. Night…..And she didn’t stop, for about 2 weeks.  If her eyes were open, she was screaming. I spent every night trying to keep her quiet as to not wake my husband, and her brother and sister. Everyone would rise for the day, and I would still be awake.  They would enter the living room chipper and ready to start the day, and I would be on the couch with one eye closed, the other half open, covered in poop and my own tears, rocking back and forth furiously in a desperate attempt to achieve one moment of silence.

Chloe would eventually fall asleep around 10, but I didn’t have the luxury of taking a nap with her, because I still had a 1 year old, and sometimes a 5 year old to look after.  I found myself becoming short fused. Kaiden would want to laugh and play, but all I wanted to do was sleep. I found myself crying out in desperation numerous times throughout the day. I questioned on many different occasions whether or not I made the right choice in having her.   It became impossible to form a bond with this screaming child that I was supposed to love.

I found myself lying in bed, dreading having to wake up the next day to take care of my own children.  I didn’t want to do it.  I resented them for existing.  I know this may sound unfathomable to most of you, but it was my reality at the time. I. Did. Not. Want. To. Be. A. Mom. Anymore.

I had slipped into a depression. I didn’t have the energy to shower, I stopped answering my texts, because I got sick of lying to everyone when they asked me how the baby was. I couldn’t tell the truth, which, at the time would have sounded like this; “Hey! thanks for asking, she actually sucks, all she does is scream and cry, yeah, and her big brother like, constantly wants my attention, it’s super annoying, uh huh, yeah and I don’t even have the energy to shower, let alone take care of 2 kids,  I kinda want to die, so, other than that, things are good!”

I didn’t want to tell my husband the truth about how I felt, because I didn’t want him to think I was a bad mother, or regret choosing me as the one to bear his children. I didn’t really know how to talk to anyone else about it either.  It is a hard thing to put into words, that form a sentence, that would make any sense to anyone, so I kept it to myself. I buried it deep down and continued pretending all was ok. I was drowning, and taking my little ones down with me, and there was no one there to rescue me.

I didn’t have it in me to do it anymore.  The constant screaming, the constant yelling, the constant crying, it was too much to bear. I needed out. My kids didn’t deserve this, it wasn’t their fault, they didn’t ask to be born.  They were beautifully delicate little humans who needed love, protection and compassion, and at that time, I had none to give.

I googled “I am depressed and just had a baby, help me.” A million websites popped up immediately all saying “Post partum depression.” I had heard about it, I think my Dr. talked to me about it, but I had paid no attention at the time because I was waiting with baited anticipation for my ultrasound.  I began reading the various threads and was immediately overcome with emotion. This was real, and it was common.  The moment I realized I wasn’t in fact a psychopath, I called my Doctor. I cried to them telling them the entire truth, begging them to help me. They got me in that very day. (Shout out to Dr. Sullivans office!)

The Dr. Spoke to me as if he had had this conversation thousands of times, and that made me take my first big sigh of relief, in as long as I could remember.  He went over my options, and we came up with a treatment plan we both felt would work best.

I joined a support group of moms with PPD and gained a wealth of knowledge from others whom had experienced my same struggles. I told the group my story, and someone suggested I get my daughter to the E.R. to be checked for “Silent Reflux.” I went that night, sure enough, she had it.  They put her on Zantac and kept us there for 3 days to monitor her.  That night, was the first night she had slept since she had been born.

After getting help for myself, and my daughter, my world changed.  I was able to enjoy her smiles, her giggles and her funny little faces. I watched her sleep peacefully and felt an overwhelming feeling of love and pride. I was finally able to begin bonding with her once we were both feeling better. My son had his mom back, and my daughter had the mother she always deserved.

Reaching out for help became an easy thing once I realized I wasn’t alone.  The fear of how people may have perceived my emotional state, kept me from getting the help I needed much sooner. I wish I would have gotten help straight away, but then again, I am glad I got to experience those feelings.  Not only because it gives me an appreciation for my life now, that is renewed daily, but it also allowed me to experience those thought processes so that I can write this today to tell you, if you too have felt this way, you are not alone.  PPD is incredibly common, and there is no reason to be ashamed.

Talking about how you are feeling and getting help is the single greatest gift you could give to those children, and yourself. PPD can affect 1 in 4 women, and the sooner you get help, the more quickly you will recover. You deserve to experience the joy associated with celebrating those milestones with your little one, and your little ones deserve to have a mother who will gratefully, and enthusiastically guide them through life. I have included some links at the bottom of this page for anyone who thinks they may be suffering from PPD, or if you just want to better understand it for yourself, or a loved one.

Life is hard, raising children is hard and sometimes asking for help can be hard.  You do not have to go through it alone, there is no shame in reaching out for a hand if you feel lost. I am so grateful that I did when I did. I am currently watching my daughter try with all of her might to climb up on the couch to get my cell phone so that she can accidently call various loved ones for the 6th time this week. My heart feels like it’s going to explode watching her little baby legs wiggle back and forth while she makes her noble attempts. Moments like these I am so thankful that I was strong enough to overcome those incredibly dark days, allowing me to enjoy these bright, beautiful ones.

Signs you may be at risk: https://www.care.com/c/stories/5347/postpartum-depression-signs-youre-at-risk/