I almost messed up, BAD.

This is my first ever blog post! Super exciting stuff.  This sight suggested my first blog be about why I decided to start blogging. Which is a great idea, but, no.  Mainly because there isn’t any cool story behind it. I was sitting in my living room and thought “Hey, I should blog!”. The end.

Having said that, I have decided to take this opportunity to tell you a true story.  For no reason other than I believe it needs to be told, as a warning, to those who may be as naive as myself.

There I was, driving down the road after dropping my beautiful bonus daughter off for her first day of kindergarten.  It had been a wild morning up to that point.  Getting 3 little people ready and out the door, two of which are incapable of dressing themselves or saying words, had proved to be a daunting task.

I was cruising down the road, a bundle of nerves, wondering if Aubrey was terrified, if she was uncomfortable, if kindergarten would be too much for her little body and mind to handle.  I was contemplating turning the vehicle around right then and there to go get her and say screw school, bring her home, burn her school uniforms so that I may begin homeschooling her in the safety of my living room….that was when I saw her. There she was.  We will call her Edna.

Edna, was a crossing guard.  But not just any crossing guard.  She was different. As my truck slowly crept up to the red light at the corner of her stationed post, I realized she was taking the time to wave to every single person, in every single car.  It’s 7 in the morning, and this lady is acting like she is on a float in the Thanksgiving day parade.

I noticed every so often as a car passed, she would give a double thumbs up.  I quickly concluded that the reason she did this, is because the occupants of the passing vehicle must have waved back.  All the anxiety I had been experiencing was quickly replaced with excitement as I realized I, too, could be the recipient of an early morning thumbs up.

When the light turned, I hit the gas and began to drive in her direction. My heart began pounding, THIS WAS IT! Our eyes met, as if time had slowed down I watched her hands begin to wave.  I was overly excited and began rapidly waving before she even had an opportunity to be the first waver.  But it didn’t matter, she twisted her hands into the thumbs up position and shook them at me.

Call me childish, call me a loser, but THIS made my day.  This lady is happy as a pig in s**t to be standing on the side of the road, in the blazing heat, waving her hands back and forth for hours, so WTF to I have to be unhappy about.

I saw her every day for a week.  Edna and I had formed a long distance bond.  I wanted to find a way to thank her for brightening my mornings.  Here’s where I almost f***ed up.

The next day I decided I was going to go to my local gas station and pick her up a flower and give her a thank you card.  Just a simple, “Thank you for being you” gift.  I looked up the phone number and called said gas station. “O*** Fuels,this Mishak, how can I help you?”. I proceeded to ask if they had flowers there.  He said “We have Forever Love roses?”. Ok, I thought to myself, this sounds a little too romantic for a new blossoming friendship, but I was on a time limit. “Great, thank you!” I replied.

I loaded the kids up and headed to get Ednas’ gift.  I walked into the store with my children in tow and as I approached the counter my eyes began shifting left to right in an attempt to visually locate the flowers. When I couldn’t spot them I leaned in to the cashier (while still looking all around for them) and said “Hey, uh, I umm…called about the Forever Love Rose?”, Still a bit perplexed about where they were hiding these roses.  The cashier leaned back a bit said “Ahhhh, yesss” and gave me a little wink.  Which was super creepy.

Anyway, he went over to the swisher sweets and blunt wrap section (Huh) reached behind a display of grape flavored blunts and pulled out a small box with a lid (weird).

He set it on the counter in front of me and said ” Here ya go, there are only two left…”. I looked down and was overwhelmed with the feeling that I was on a hidden camera show. Because life suddenly didn’t make sense. There was a box, with tubes sticking out.  In each of these tubes was a rose.  I pulled a tube out, and carefully examined it. The “rose” was literally 1/4 inch long and was made of felt. Like it was microscopic.  My first thought was “Ok, how the f*** are they almost sold out of these cheap ass roses that were clearly designed for ants to give one an other on valentines day”. And my second though was “Hmmm, it might be kind of cute because the rose tube would fit perfectly into the card I had gotten her, and I was in a huge rush so I said “Ok, whatever lets do it.  $4.99 is a little steep for a piece of fabric claiming to be a rose that I need a magnifying glass to even enjoy but, I know you just work here and don’t make up the prices”.

It was then he got a strange look on his face. I was trying to read him. I was listening to the deafening silence for clues as to wtf he was looking at me like that for and what I was missing.  It was as though he realized the children hovering around my ankles for the first time. He looked at them, looked at the gift I was about to purchase, then looked at me. “Why are you buying this?” He asked. At this point I wanted to roundhouse kick him in the throat. This guy is gonna charge me my life savings for a piece of s**t tube with a piece of s**t flower, then have the audacity to question me???

“A really sweet little old lady who works at my daughters school, I wanted to get her a gift for being so great at her job? I really have to go though,so can we wrap this up here please?”

A look of sudden understanding swept across his face then immediately turned to fear. He literally grabbed the flower tube OUT OF MY HAND, shoved it back into the box, turned around, placed it back into its’ original resting place, then circled back around, placed his hands on the counter and smiled at me. I smiled back, laughed a little and began fixing my hair because I knew at any moment Ashton Kutcher was going to jump out and yell “YO! You got punked!”

Mishak told me quite abruptly “Those are not for sale”…

Dude, I rolled my eyes more confused than I had ever been in the history of my existence and exited the store with my children.

I was fuming, this a**hole ruined my suprise present plan and I wanted answers damnit. I dropped Aubrey off, drove past Edna and gave her a defeated wave, knowing I had missed the opportunity to make her day.

I got home and decided to google Forever Rose.  Because there was something very strange about my encounter that morning and I needed answers. After one minute of googling, everything fell into place. Mishaks behavior, the words that were never spoken between us. The twilight zone episode I was trapped in finally made sense. When I realized what happened, I wanted to go back and give Mishak a hug….. I was LITERALLY 10 minutes away, from giving sweet little Edna…..

A f****ing CRACKPIPE dude. I’ve done alot of drugs in my day, but I’ve never done crack. So I had no clue that the object I was holding in my hands was to be filled with brillo pads and smoked in a back alley somewhere.

I was about to walk up to Edna and be like ” Hey Edna, here’s a crackpipe, thanks for being you!”

Like, WHAT?! I came into the store with 3 children, granted most mornings I look like an extra from The Walking Dead season 6 but for CHRISTS sake dude.

I’m glad Mishak did what he did. What if Edna didn’t know what it was either??? What if she strolls into the crossing guard lounge where all her crossing guard friends are located, sitting around eating their lunchs, minding their own business and Edna slaps down a crackpipe in the middle of the table and says ” Look what I got today ladies!”

What if they all exclaim how cute and simple it is and now they all want one and they go get one and every crossing guard in this town is walking around with crackpipes in their pockets and its ALL MY FAULT.

They all get arrested, right, now theres no crossing guards left in the town, so I feel obligated to pick up the slack. I recruit a bunch of my friends to help me man the corners, the only trouble is, we dont know what we are doing.  So cars are crashing, kids a running for their lives screaming, diving for safety, I’m in the middle of the road screaming “I KNEW I SHOULD HAVE TURNED AROUND THAT DAY, PICKED AUBREY UP, BURNED HER SCHOOL UNIFORMS AND HOMESCHOOLED HER IN MY LIVING ROOM!!!!!!!”.

Anyway, we ended up getting her a card.  I thought it would be really cute if Aubrey was the one to give it to her.  I had Aubrey get out of the truck and I watched her gleefully skip to Edna, filled with pride as she knew she was about to make someones day.  It was then that Aubrey tripped over a branch that had been jutting out of the ground, I watched her face turn from happiness to terror as she faceplanted into the ground. Edna ran over to her than began visually searching all around for the piece of s*** parent in charge of this kid.  I thought about slinking down into the seat so she couldn’t see me but decided to do the right thing and go peel Aubrey off of the ground. She dusted herself off, handed Edna the card and limped back to the truck. I explained to Edna that we wanted to thank her for making our mornings so much brighter, and that we thought it would be sweet if Aubrey had been the one to deliver the card. I thought Edna look at the card, she thanked me, and as I was walking away she yelled “Mam?!”, my heart skipped a beat, she realized what a nice gesture it was..” “Yes? ” I  smiled.

“You really shouldn’t let yo kids run out by the road all willy nilly, what if she woulda fell into traffic? You probably woulda felt real bad if she got slammed by a car. Ya gotta be more careful out here.”…She turned back around and began smiling and waving to cars…

I felt like s***. I am a crappy mom. I shoulda never sent Aubrey to her imminent death.

I learned a very valuable lesson during this experience. 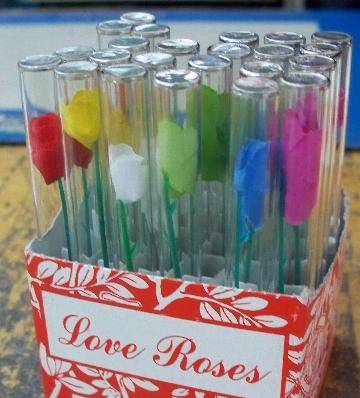