Start typing and press
Enter to search
Skip to content
Home > My Blog > I Won A Pair Of Leggings. The Rest Is History.

I Won A Pair Of Leggings. The Rest Is History.

Some of you may recall a post entitled "Fundraisers & Ghost Pants; which I had written in the early days of my blogging. (If you missed it-it's here). In that post; I detailed my experience with other moms at my daughter's school - and their crazy leggings.  One could even say I poked a bit of fun at said legwear. I have been invited to tons of different groups on Facebook for various products; and I usually roll my eyes and leave them immediately.  No offense intended; it's just that I have had no interest in purchasing; nor getting involved with selling the stuff.  It feels strange and uncomfortable to me. A lot of this probably has to do with my immense fear of rejection.  Me trying to sell you something would go like this: "Hi, would you like to buy this cool wrap that you put on your tummy? You will be 46 pounds skinnier by tomorrow morning." "No thank you, Tiffany." "Oh my God, okay, yes you're right. I'm an idiot.  Forget I even said anything. I'm so sorry.  Here, let me just buy you 4 wraps and send them to you for free as an apology for disturbing you, actually I'm gonna send you some flowers too. I love you. I'm stupid." I never wanted to be in that awkward situation like "Hey girl, I know we haven't talked since preschool - but have I got a deal for you!" So it goes without saying; that when I witnessed many of my friends slowly begin to change their wardrobes to Lularoe leggings with wolf faces and popsicles sticks plastered all over them - I raised an eyebrow.  I didn't understand the hype and I certainly didn't want to be a part of it. Until I won a free pair of leggings. Here's what happened...One day I met up with my trusted friend Lindsey T. for a playdate.  Whilst our children scurried about the playground together; I couldn't help but notice the flashy colors and wild patterns on her leggings from the corner of my eye. "Are those them Lularoe pants thingies everyone's going crazy about?" I asked. "They are! They are all I wear now.  They are so friggin comfortable; it's literally like wearing pajamas out of the house everyday." She said. My ears perked up.  Pajamas you say? "Can I feel them? Is that weird?" I asked, reaching over to feel them anyway; regardless of whether she liked it or not. They were soft and all; but I still didn't understand what the big deal was. We continued to watch the kids play - no more Lularoe talk from that point on. I didn't want to offend her by telling her that I would rather save the money and continue to wear my actual pajamas out of the house. A few days later I get a message from Lindsay. "I nominated you for a Lularoe contest. You won a pair of leggings. What's your address" She asked. Now we are talking.  I damn sure wasn't gonna fork over any money for these things - however "free" is my middle name, girl, send em on over. 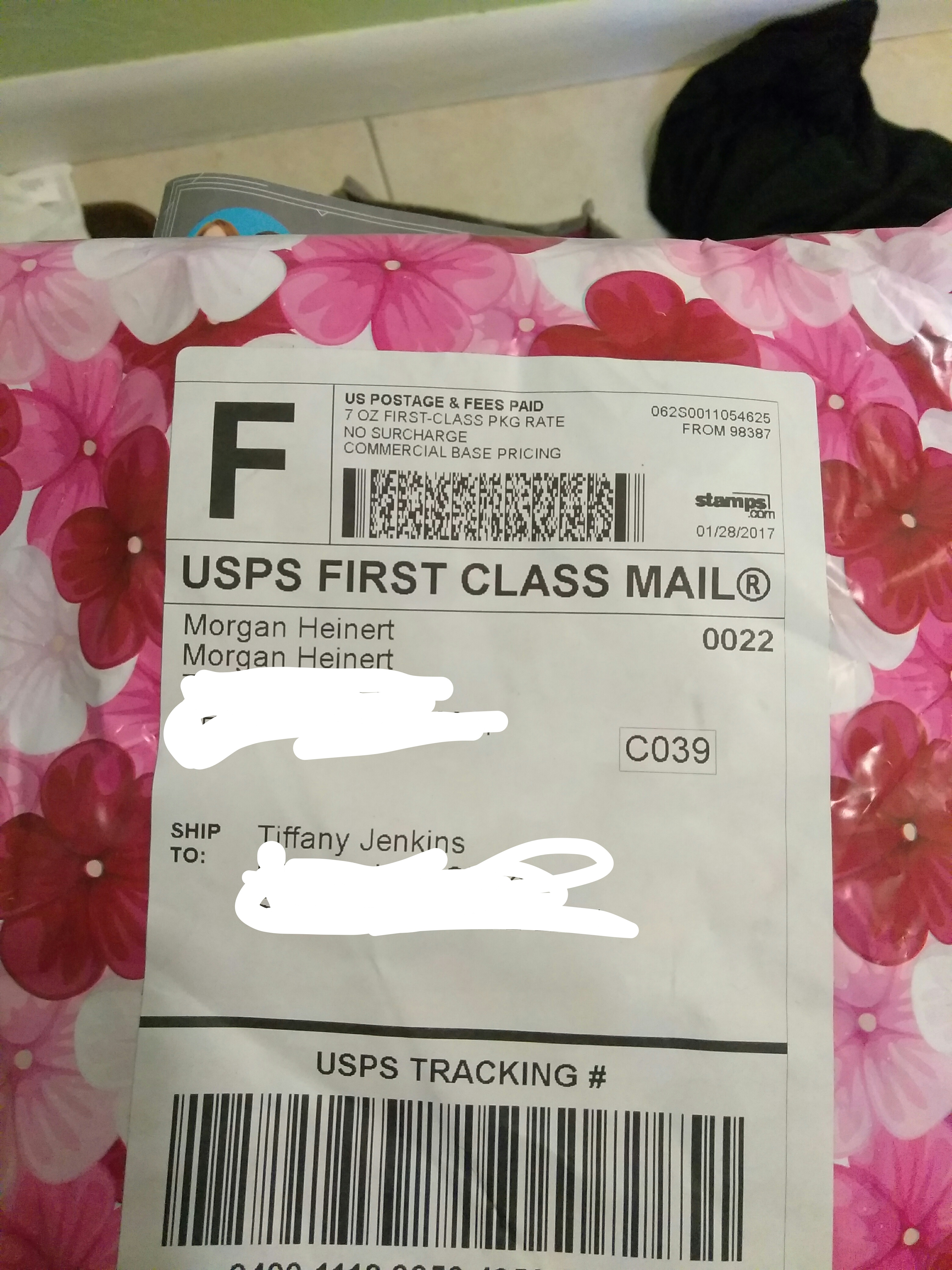 2 days later I received a package in the mail.  Now I don't know about you; but packages are always fun - no matter how old you are.  I snatched it from my mailbox and gleefully skipped up to my front door.  I scurried passed my husband seated on the couch while carefully avoiding eye contact - I didn't feel like explaining and I was eager to put these damn leggings on and see what all the hype was about. I locked myself in the bathroom and opened it up. The first thing I noticed was a small box of "Nerds". I debated for a moment about whether or not it was a good idea to eat candy before trying to squeeze my fata** into spandex-but gave in and inhaled the entire box in one swig. 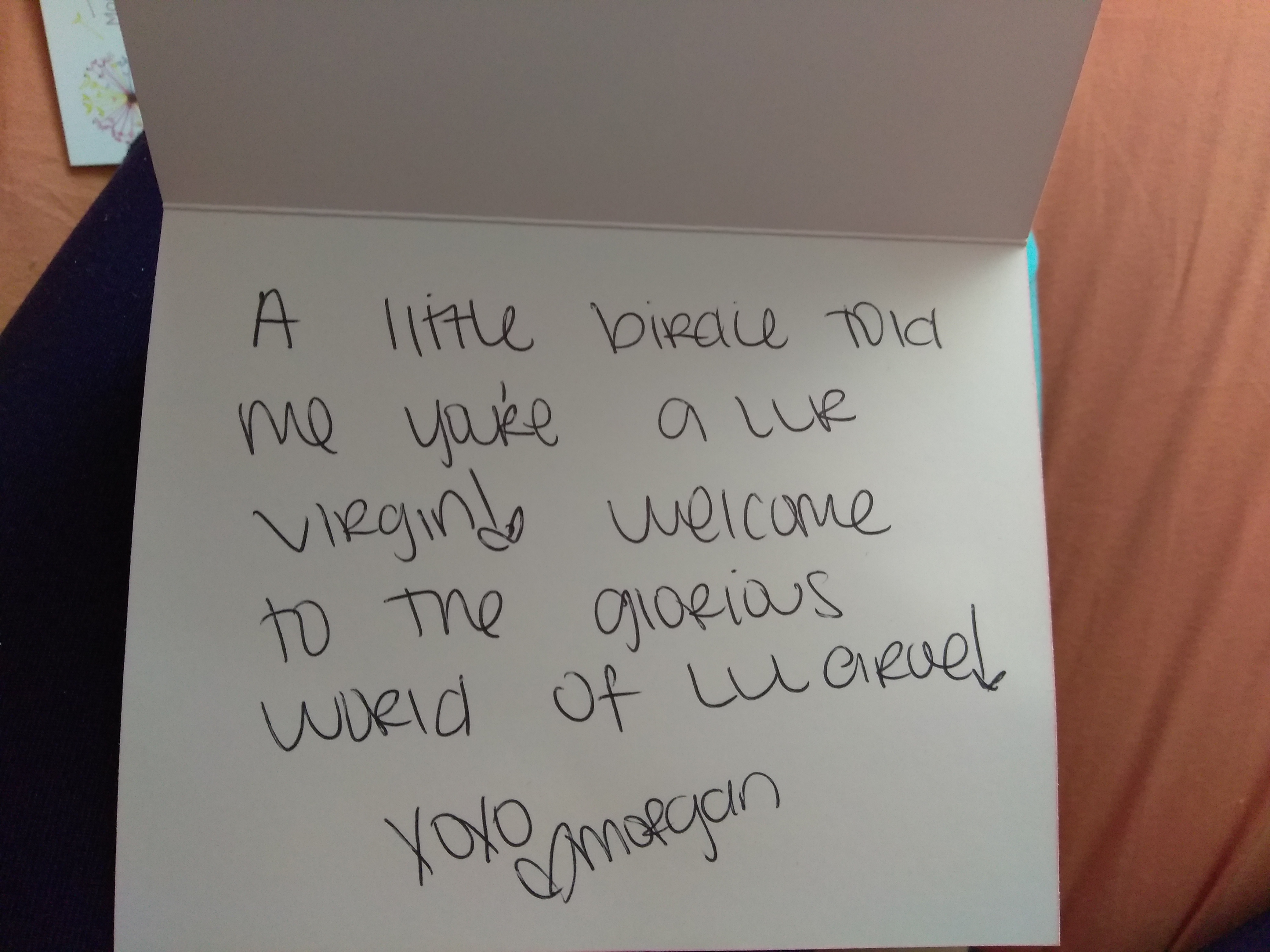 There was also a hand written thank you card from the consultant - which I thought was super sweet.  She took the time to write me a lil letter. I love that. I crunched my Nerds around in my mouth as I began putting the leggings on. They were my favorite colors.  Purple and black.  How the hell did this girl know that? What kind of sorcery was this? Was she a spy?  Perhaps she was a witch with special powers. I am still not sure but either way; I was grateful. I pulled the leggings up around my waist and did a little dance to see how they felt.  I did various yoga poses, some cheerleading moves and finished with the robot.  There was no constriction anywhere; these leggings bent and moved with me. They were nice; but I still didn't get what the fuss was about.  I walked into the living room and plopped onto the couch; confused and a little disappointed. It was in that moment that the true magic of these leggings revealed itself to me.  If you are a woman - you will understand what I'm about to say... 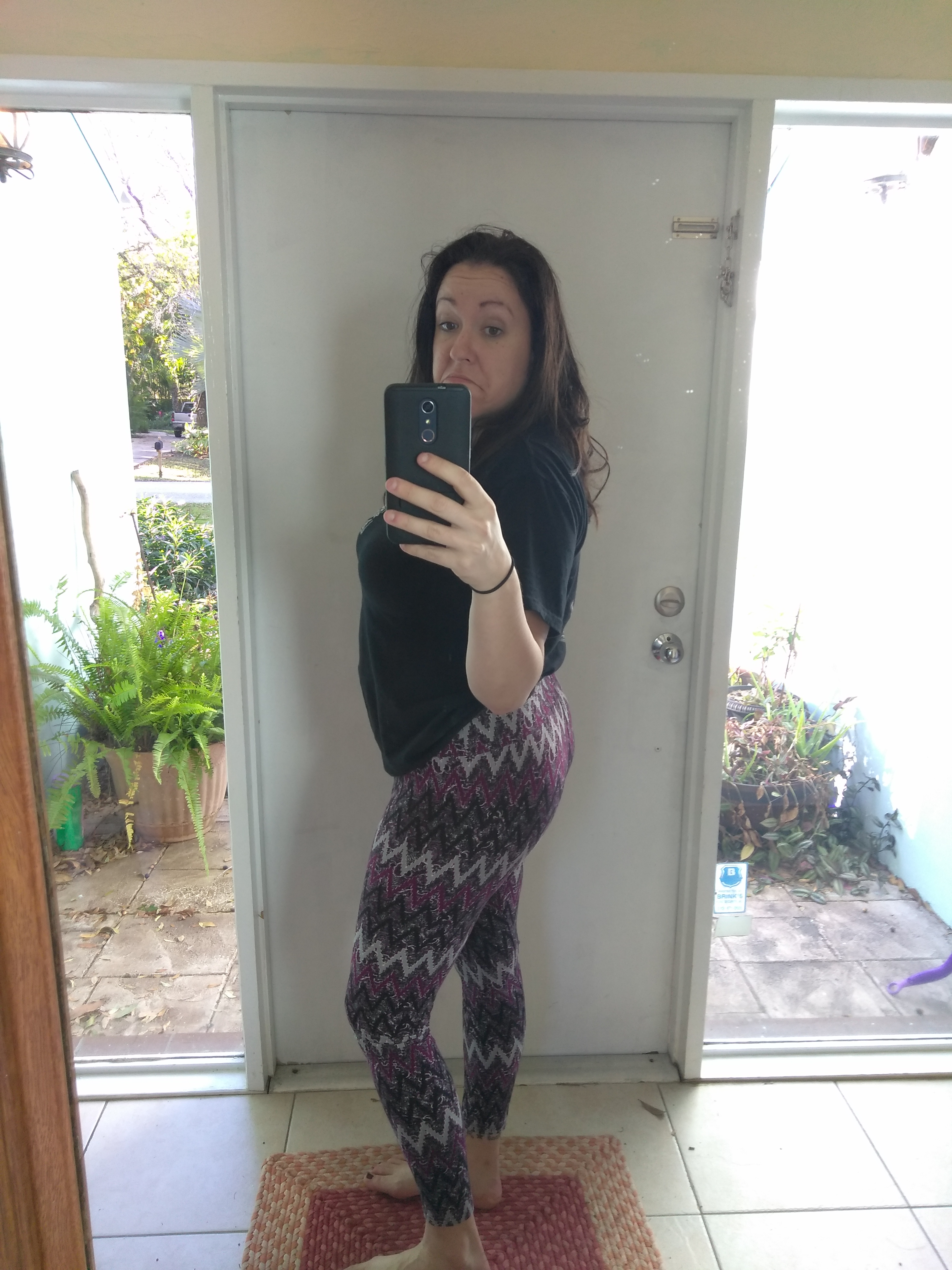 The fabric was so soft; that it didn't cut into my rolls whatsoever.  In other words- I didn't have to worry about my intestines being smushed when I sat my fat-a** down.  I have recently put on a few pounds and was always adjusting my shirts while seated because whatever pants I wore cut my stomach in half.  The only way to feel a moment of relief was to unbutton my jeans and release the Kraken. These leggings literally felt like I was naked from the waist down - I sh*t you not.  I felt so free and warm and snuggly and....happy... I wore these leggings for 31 hours straight.  Did you hear me? I wore these from 3pm on Tuesday, to 10pm on Wednesday. You can judge me if you want - I don't even care. I would probably still be in them if my daughter didn't call me out - "Ew are those the pants from yesterday Mom? Gross" "Um you know what else is gross? Dipping your lollipops in ketchup- but you don't hear me hatin' on you. So zip it". She was right though. It was time to take them off. I changed into a pair of jeans and it wasn't the same. They were heavy and had a zipper and pockets and it was TOO MUCH. Get this- The very next day; my new best friend Lindsey- entered me in another legging contest and again...I won.  Shut the front door. Listen; to say I was excited was an understatement. This time I knew what I was winning and I couldn't wait. If I played my cards right- I could alternate these 2 pairs of leggings and wear them everyday for the rest of my life. 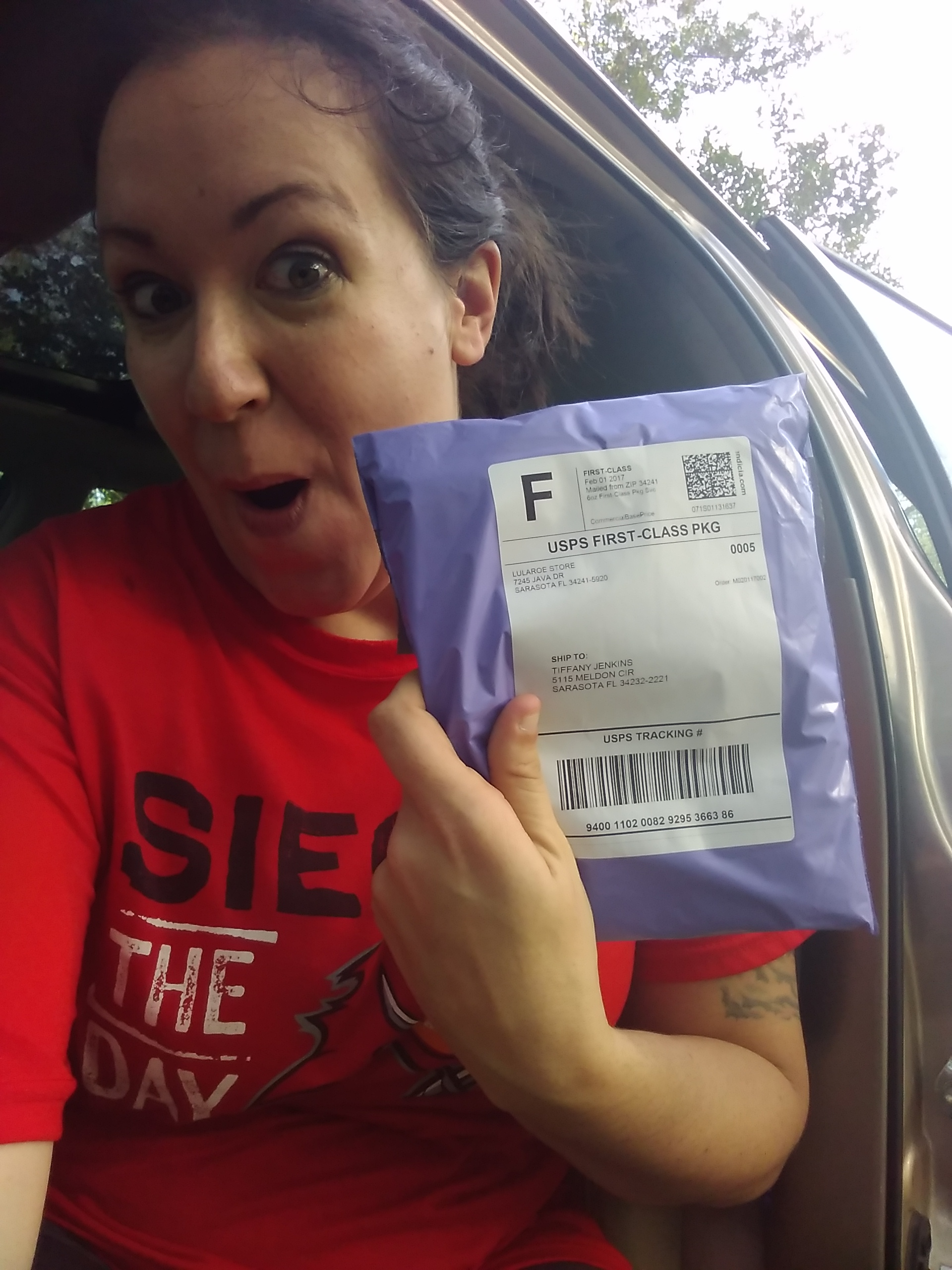 They came 2 days later sent with another sweet letter; this time from Sarah Gaston. I furiously ripped them open and put them on immediately.  The pattern was gorgeous and I closed my eyes and let out a heavy exhale of gratitude as the familiar feeling of angels hugging my legs washed over me. That night I witnessed my first "Shop the box" on Facebook live with Morgan Heinert.  I'd seen a few before but didn't pay them much attention.  This time I was laser focused on how this s**t went down - because I wanted more. It's much more intense than I initially realized. How it works is: the consultant has a box of inventory; she opens it live in front of a group of ravenous legging/skirt/shirt/dress seeking women on Facebook.  If you see something you want; you must type "sold" in the comments before anyone else. That's it - the clothing is yours.  It gets intense in there. It's almost like being at an auction or gambling.  Your palms get sweaty and you are on the edge of your seat waiting for the perfect leggings to flash across the screen. If you see a pair you love - you have to be quick or they are GONE. "Okay Tiffany; well I'm sure they have another pair available-" NO! They DON'T! This is the thing! All the outfits are limited editions.  In other words - if you don't snag something you like; you are s*** out of luck.  You have to pray the consultant receives this item again in the future- or find other consultants and check out their stash. They don't all carry the same inventory - this is what makes it so exciting. That night I noticed a pair of leggings I liked-they were the most "toned-down" of all the wild patterns I saw. I needed them. My fingers moved like lightening: Tiffany J sold #87" - 'enter'...   What the hell am I doing? Why the hell did I get so serious about those leggings all the sudden - like - I was ready to fight someone about them. I don't know what happened that night - I bought 2 more things. (Don't tell my husband)...No seriously. I never buy new outfits for myself - I'm always so busy being a "mom" that sometimes I forget that I am also a woman; worthy of a treat for myself every now and then.  (I'm probably gonna treat myself next month too - again - don't tell my husband). 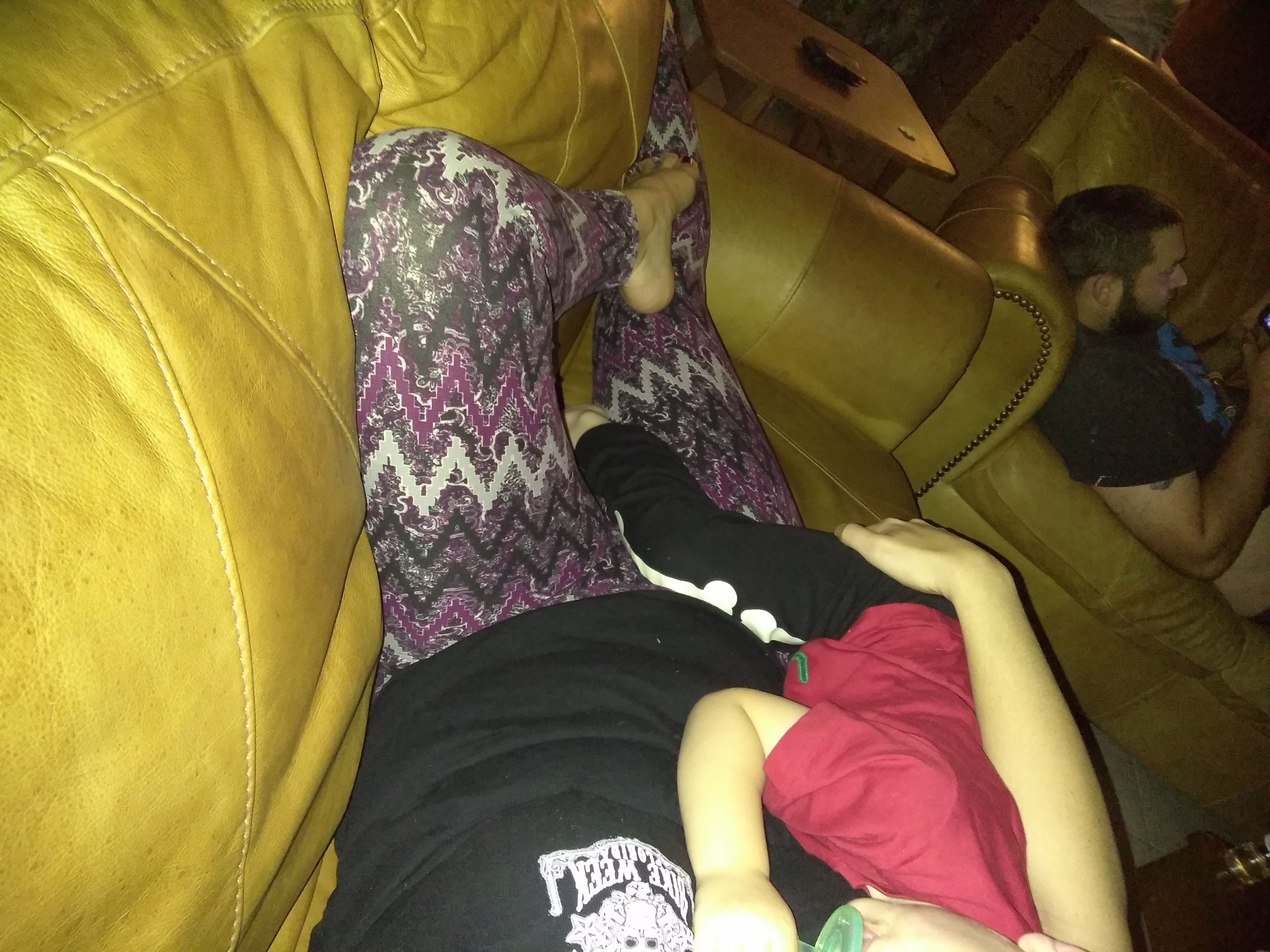 Anyway I want to give a special shoutout to Morgan Heinert & Sarah Gaston for my free leggings. Actually, I'm not sure if I should be thanking you.  You have awakened something inside of me that I never knew was there.  A desire to burn every pair of jeans I own and an incessant need to hunt for cool leggings. Some will say I'm crazy; that I've lost my mind and have been swept up into a fad that will one day fade. But it made me happy to receive gifts in the mail; and as someone who wipes butts and cleans up puke all day - I'd say there's nothing wrong with doin a lil somethin for myself. Anyway. That's what happened. One minute I'm sitting on the couch minding my own business- next thing you know I'm hosting an online party for Lularoe. This means all my buds can join me for a night of violent bidding and laughs.  I'm not gonna stalk ya'll about it - (I might) I'll try not to.  It will be fun and you should watch. (I'm not just saying this because I get cool prizes if you join me). Okay.....Part of me is; but most of me just wants you there for support! The end. Morgan's Page Sarah's Page

9 replies to I Won A Pair Of Leggings. The Rest Is History.